Phantom of the Paradise – Blu-ray Review 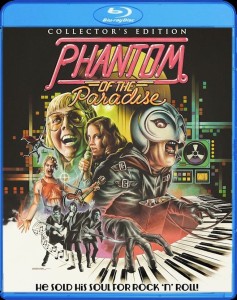 No, this isn’t really a horror movie, despite its title. It is grade-a weird with a slice of cool, and sometimes that’s enough for me. The big surprise is that it’s sort of a musical, a genre I usually don’t truck with, and yet, I love this flick to death. Maybe that’s because of the horror trappings, or it’s black as pitch dark comedy, or the catchy music by song writer extraordinaire Paul Williams, or it could just be the direction of Brian De Palma back when he was still young, fearless, and discovering his talent. You know, as opposed to what he does today, which is just sort of sad. It could be all of those things, not to mention a whole lot more, but just in case you have yet to see this slice of strange, take my hand and let me give you the tour of this majestic theater, and all the phantoms, and worse, that haunt it.

In Phantom, Paul Williams plays tiny, creepy, mysterious music mogul named Swan, known for his Midas touch when it comes to music, and his eccentricities, such as never appearing in public without wearing a mask. And yes, this was years before Michael Jackson could claim the same. While looking for the perfect musical act to open his new club/theater, The Paradise, he stumbles upon a sad sack named Winslow Leech. Swan loves the man’s music, but not the man, so he sets about stealing the tunes by framing Winslow and having him thrown in prison. There, poor Mr. Leech runs into all sorts of hardships, such as having all his teeth pulled out and replaced with metal ones, and getting his face caught in a record press that not only mutilates his face, but renders him a mute. Eventually Winslow escapes and returns to The Paradise to seek revenge, but ends up getting more involved with the diabolical Sawn, as well as falling in love with the lovely lady songstress, Phoenix.

Thus begins a Faustian tale of greed, lust, betrayal, murder, madness, music, and contracts signed in blood. What sells this movie is the fine direction by De Palmer, complete with his (in)famous split screens, the earnest, if over the top acting by most of the cast, loads of black comedy, and the music, which is at times hilarious, heartbreaking, and catchy as all hell. With a soundtrack by Paul Williams, a man who has penned more hit tunes then you could ever imagine, you will be humming, if not outright singing, these musical numbers for days after seeing this movie.

As for the extras of this new Blu-ray/DVD combo pack from Scream Factory, there are two new audio commentary tracks. The first is with Jessica Harper, Gerrit Graham, and The Juicy Fruits, or at least the actors that played the odd ball group in the film. The second commentary is with production designer Jack Fisk. This is a 33 minute interview with director Brian De Palma, and another interview with Paul Williams about the music of this musical that’s about 35 minutes long. There is a featurette about designing the phantom helmet with make-up effect man, Tom Burman, that’s just over 4 minutes. Additionally, there is a collection of alternate takes, outtakes, and a still gallery.

While not a true horror movie, Phantom of the Paradise falls firmly into the category of ‘strange but memorable’ movie. It is a load of fun, often funny, and has some great music accompanying it. It is unlike most films I know, and for that alone it gets high marks from me in this world of ours full of repetition and rip-offs. The fact that it’s made with loads of skill and style is a bonus. If you’ve never seen this movie, you owe it to yourself to check it out, and this beautiful looking Blu-ray is a great way to do that. If you’ve already seen Phantom of the Paradise, then you already know how cool it is, so get this Blu-ray where the movie looks and sounds better than ever, and comes with a bunch of extras to boot. Either way, consider this one highly recommended.