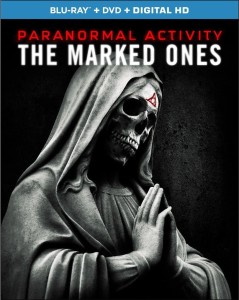 Paranormal Activity: The Marked Ones

Another Paranormal Activity movie? And what’s more, this is but one of two that will be released this year. Really? Really, really? Not even the Saw movies beat the dead horse that bad. Well it’s my job to watch this stuff, even if I don’t want to, if just to spare you people some pain. Okay, let’s do this!

Well, that’s wasn’t as horrible as I thought it was going to be. No, it’s not great or anything, but neither was it completely without merit. It’s a far sight better than those later Saw movies, so there’s that. So hey, do you want to know more about the first Paranormal Activity movie of 2014? Well okay, I can do that.

This movie is a bit of a departure from the Paranormal norm, as it’s not about well-off white people living in impressive houses. No, this one is about a Latino family living in an apartment so small that the widowed father and the just-graduated-from-high-school son have to share a bedroom. The graduate in question, Jesse, has a weird downstairs neighbor lady who keeps to herself so much so that she covers all of her windows in newspaper. After spying on the strange “witchy woman”, and seeing her doing witchy-like things, she is killed by a one of Jesse’s former classmates for no apparent reason. Being curious, and I guess bored, Jesse and some friends look into the matter, and therein lies the hook needed to draw them all into some paranormal activity.

Don’t get me wrong, this is not a love fest, not everything is wonderful in this film. In fact I think it’s the weakest of the lot yet. There are more than a few plot holes here, and if you’ve seen any of the previous PA movies, you will notice a lot of the same tricks done here. But then, this is the fifth movie in a series, and that’s to be expected. Also, Jesse and Co. have to keep making bad decisions in order for parts of the plot to play out, something I don’t think was done all that much in any of the previous movies. In those earlier films, the characters didn’t actively go sticking their noses into trouble all that much. There were several times during The Marked Ones where I thought, “well, you idiots get what you deserve after that.” Lastly, and most damming of all, never once did this horror movie scare me. Maybe the Paranormal Activity bag of tricks is finally empty? Whatever the case may be, while the previous movies in the franchise had their ups and downs in overall quality, they all had moments of effective fright. I can’t say the same thing about The Marked Ones.

That said, there are some good things to this movie too. I love the use of an old Simon electronic game as an Ouija board. Sure, that’s a minor thing, but it was pulled off well. Also, the evolving Paranormal Activity mythology is further explored and explained, and I was surprised to find out that I liked parts of that explanation a lot. It conjured up shades of Rosemary’s Baby for me, and that’s never a bad thing. Lastly, there are some direct links to the previous movies in what otherwise feels like a side story, including an ending I thought was leaps and bounds better than the last movie’s.

So Paranormal Activity: The Marked Ones was a little bit better than I thought it to be. Sadly, the new Blu-ray from Paramount is worse than what I’ve come to expect from a modern release. There are two versions of the movie here, one rated and one unrated, but since I didn’t watch this movie twice, I can’t tell you what the difference between them is. I can say that I watched the unrated one, and if you are expecting gore galore from that version because it’s unrated, you’ll be disappointed. Honestly, there’s nothing in that cut that would warrant anything more severe than a PG-13 rating. Wait, the movie originally got an R-rating? No way. What the hell for? Whatever, other than the two versions of this movie, there is a short collection of six deleted scenes that all together run about ten minutes and adds nothing to the film. And that’s it, that’s all the not-so-special features in this release.

Paranormal Activity: The Marked Ones is not a horrible movie, but it’s not all that great, either, and never once is it really scary. It does expand on the backstory of the previous films, so diehard PA fans should check it out if just for that. For everyone else, consider it mildly recommended at best, or a pass if you’re sick of the found footage thing by now.