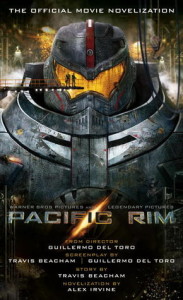 Alex Irvine won the Crawford Award for his first novel, A Scattering of Jades. He has also written other film tie-in novelizations including Transformers Exodus, Transformers Exiles and Iron Man: Virus.

In the near future, a fissure has opened at the base of the Marianas Trench, spewing forth monsters from another world, the ‘anteverse’. Bent on destruction, these colossal beasts, named Kaiju, could only be stopped by nuclear missiles at the expense of the cities and populations that ringed the Pacific Ocean, and so the Jaeger program was born. The Jaegers, giant robots controlled by a pair of humans telepathically connected to each other and the machine, initially had the upper hand but now bureaucracy and an increased Kaiju presence have dwindled the mighty machine taskforce to a mere handful, and humanity must make a last, desperate stand if our race is to survive.

Adhering closely to the story and subsequent screenplay by Travis Beacham and Guillermo Del Toro, Irvine has crafted a solid novel which makes for an entertaining, if slight, read, but brings nothing new to the table.

It is a rare occasion when a film is better than a book, but the visually astounding battles between the Kaiju and the Jaegers were never going to be bettered on the page, and these moments are, indeed, the least interesting parts of the novelization. That said, Irvine reveals details about both factions that might have been lost in the onscreen mayhem, and these nuggets add a welcome layer to the tale. For example, I had no idea that the Kaiju were silicon-based life forms, or that Marshall Pentecost was suffering from brain damage and not just radiation poisoning (not that he displayed much in the way of neural damage in either the book or the film).

Fun little additions such as news reports, journals, classified documents and essays are sprinkled throughout the book, adding to the richness of the world and offering tantalizing glimpses into other perspectives, such as psyche evaluations of the main protagonists and the onset of Kaiju-based religions. Irvine also dips a little into the inner thoughts and back-stories of supporting characters, most notably with the Australian father and son team and the scientists (who have less comedic relief value in the book).

For anyone who left the film disappointed at the lack of plot, this novelization may plug a couple of holes, but ultimately goes no deeper than a superficial smattering of inner monologues which, at the end of the day, is exactly what a giant monster/robot story really calls for.