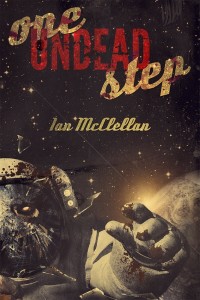 I mentioned just a while back that I love horror novels that utilize history as a basis.  When an author can successfully combine real events with fictional horror, the result is usually a terrific story that is enthralling and entertaining.  Such can be said for ONE UNDEAD STEP, a recent release from author Ian McClellan.  Rife with originality and solid prose, McClellan’s horrific tale of a near zombie takeover will keep you riveted.  And while it is not perfect, it is still a hell of a read and one I had a hard time putting down.

If you are not familiar with ONE UNDEAD STEP, here is the plot synopsis courtesy of Amazon.com:

Many people know that the 1969 moon landing was faked, but are unaware of the actual circumstances. Find out how the U.S. faked the moon landing to avert the zombie apocalypse as the lives of a disgraced B-movie director, a bar owner, some drunks, an Army Ranger unit, a bunch of gangsters, an affluent but very dysfunctional family, and a few cops come together in One Undead Step.

One year after Romero shocked the world with Night of the Living Dead, a small city is rocked by grisly killings, the gory details of which are only known through whispered rumors. The government presence that makes the populace all the more nervous is unable to contain the impending threat that grows out of control on a hot, humid night in Mid-July. As the city’s residents fight for their lives, the Military rushes to make a film about two men landing a small spacecraft on the moon. Will their plan work? Find out as an evil man finds redemption, some soldiers choose between their mission and duty, a young couple finds forbidden love, an older couple reignites their passion, and a bartender gets stiffed for lots of drinks in One Undead Step.

I have to start off by commending McClellan on his unique concept for this book.  I have to say, it is a very interesting proposal.  I love the idea of the government trying to keep the public from learning about zombies, especially by using something as grand as a moon-landing to do so.  Because of the paranoia that was rampant during that time period, I can totally see this as a plausible scenario.

ONE UNDEAD STEP is written well and flows at a smooth pace.  McClellan seems to have a natural talent for storytelling, which is showcased in the way he ‘shows’ instead of ‘tells’.  Here is an example:  “His face had a hawkish look that was accentuated by his beak of a nose.  He looked at Will and smiled.  The smile was all politician or salesman (if there’s a difference), but he couldn’t take the predator out of his eyes.”  I really like this writing style, as it allows for more immersion into the book.

The characters are flawed and colorful, a group of believable average-joes who we grow to like (and hate, in some cases).  McClellan does a great job of bringing them to life, and they are a major part of what makes the book so good.

My sole complaint about the book is the ending; there are a couple of chapters labeled ‘Zombie Stories’ at the end, but they don’t fit with the rest of the book.  I am not sure if McClellan put them in as an afterthought, or if they’re supposed to have some relevance to the story.  Either way, they don’t fit for me (although they might be good as solo stories in an anthology or something).  If you read this book, I would stop at the Epilogue, wait a bit, and then go read the chapters afterward as individual pieces.

But still, ONE UNDEAD STEP is a fun read and I recommend giving it a shot if you like zombies.  I am willing to bet you will never read about the moon landing with the same mindset again.  This book is available now in a variety of formats.