Of Monsters and Madness – Book Review 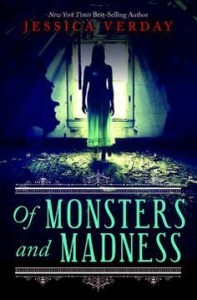 A low haunting voice fills the darkness behind her, “It is my best work yet, although rather messy. Don’t you think?” The scent of blood is heavy, as loops of flesh are strewn around the room glistening in the soft light, all that is left intact is a single lock of hair.  Suddenly fearing that she has given her promise to a madman, and her love to another, Annabel suddenly becomes aware of who is responsible for the murders that plague the streets of Philadelphia.

Sent to live with her father, who doesn’t approve of a girl delving in medical advances. Annabel Lee arrives to discover that even with her new and conventional medical knowledge, nothing could have prepared her for what lies ahead. A dark and foreboding mansion now lays before her, with more gruesome secrets than the new rash of serial killings sweeping the streets. 1826 in Philadelphia, was not the same as living in Siam, where she had resided for the past 10 years.

Warned not to roam the house, or the grounds in the dark of night, Annabel’s curious nature is tempted, where she soon discovers that secrets hide around every corner. Yet, the biggest mystery may be, why her father, known for his scientific discoveries, hides in a secret room, with only an assistant by his side.

All too soon, Annabelle becomes infatuated with her father’s sweet and caring assistant, Allan Poe. A boy who spends his time writing poetry, when not working. But, she also finds herself fascinated by her father’s other assistant, the ill-tempered, cruel and often mocking, Edgar Poe.

Strange happenings continue to haunt the night, as mysterious figures creep amongst the mansion with Edger looming in the shadows.  Eerily similar to Allan, the fact that everyone denies Edgars existence, only adds to his dark and mysterious nature.

As her father retreats in secrecy, the truth of his horrific experiments surface bringing with them the unsettling truth; is Edgar the assistant to a madman, or could he himself be the madman to fear?

Leaving Annabel struggling with the questions- What would a madman sacrifice to bring his work to life, or Can a madman really be a monster in disguise? Leaving room open for a sequel, for poor sweet, sweet, Annabel lee.

Breathing life into classics of the 1800’s and re-introducing them to a modern day audience, Jessica Verday, takes Edgar Allen Poe’s classic poem, Annabel Lee and spins it on its head.  A tale set in the early time of Poe’s life, gives Jessica Verday, a beautiful, gothic setting for a man who writes atmospheric tales of horror. Let, Of Monsters and Madness wrap you with sorrow’s embrace, dragging you deep into the macabre world of a madman.