Nothing Left to Fear- film review 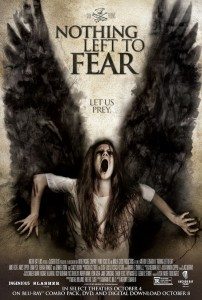 Nothing Left to Fear

Our horror filled month of October is in full swing! After a few disappointments, I am happy to report that I have seen a very entertaining new horror film filled with creepiness and real terror. It is a true treat for genre fans and one I hope will find an audience.

Nothing Left to Fear is a new film from first time director Athony Leonardi III and was produced and co-scored by Slash. Yes, that Slash. The guitarist started a production company, Slasher Films, and has teamed up with Anchor Bay releasing to make horror films. This is his company’s inaugural film and it is very, very, good.

The film tells the story of a preacher, his wife, their young son, and their two teen daughters as they make a move from Maryland to a small town in Kansas. The preacher is played by James Tupper and his wife is played by Anne Heche. The daughters are played by Rebbeca Brandes and Jennifer Stone. The son is played by Carter Cabassa.

They arrive in the town and are greeted by their new congregation and the Pastor that Tupper will be replacing. The outgoing Pastor is played by the great Clancy Brown as a humble Midwesterner but, and I am not giving anything away here, he carries a very dark secret, as does the town.

You see, the town is a portal for the gateway to Hell itself and the townspeople have been chosen to guard the gate and give sacrifices to Satan when the calling arises.

The town in the film is based on the real Stull, Kansas which legend says shows signs of being a gateway to Hell.

The plot is set after a mellow beginning and things are put into motion as the new Pastor’s family is terrorized by the impending doom surrounding the town. What follows is some good old fashioned horror courtesy of satanic rituals, blood splattered houses, townsfolk hiding in the darkness, and demonic possession.

I am afraid I cannot tell much more than that due to the surprise factor. I do not want to spoil you frights!

What I can say is that the cast is uniformly good, especially Brown who does not go overboard with his role. Lesser actors would have jumped at the chance to chew the scenery but he plays it real, which makes his character’s true nature terrifying. The young actresses who play the daughters and the young boy as the son do solid work. Big kudos go to Jennifer Stone for reasons I will not divulge here. Her character’s arc is fantastic and a real surprise.

Director Leonardi shows us that he knows his way around a horror film in a big way. He handles the scare scenes with the proper respect and fills the film with a solid sense of dread right from the beginning. The slow build is a nice precursor to the rest of the film.

I want to say that this is a film that pays homage to the great satanic cult drive-in films of the seventies such as Brotherhood of Satan and Race with the Devil, but that would be doing it a disservice. Those films are great and, perhaps, in theme this film tips its hat to those grindhouse classics but it is more than that. It is a very effective horror film that does not use the satanic angle merely as a device.  It uses it to form a full story with real characters who we grow to care about and when the evil begins, we are filled with a fear that they might not make it. Leonardi does a great job his first time out and I look forward to his next film.

Nothing Left to Fear is not a classic but a solid entry into today’s sequel and remake obsessed horror cinema. It is well directed, written, acted, and very scary. Enjoy!