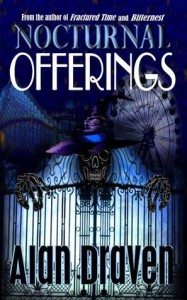 Picture that friend.  You know the one.  He can always be counted on to put his foot in his mouth, to say something off color.  You can bet money that he will tell a misogynistic joke in a room full of women.  You can set your clock by his childish antics.  He also surprises you by being at your side when you need him the most.  Nick Kubrick, the main character of Alan Draven’s Night Offerings is that “friend”:  he is immature, goofy, a tad chauvinistic and conceited, yet he has a certain charm.  More than that, he is downright heroic.

Night Offerings is essentially two novellas: “The Midnight Queen” and “Post Mortem Adventures.”  The two narratives are tied together by one clever and apparent link, and one shocking reveal that served a nice jolt to this rarely surprised reader.   While “The Midnight Queen’s” horror is creepy/sexy (picture the Stepford Wives living at the Playboy Mansion), “Post Mortem Adventures” is a freak show, literally.  “The Midnight Queen” has a sex, drugs and rock and roll vibe that counters and also complements “Post Mortem’s” film noir-type ambiance.  Both are plot driven, beginning with the book’s very gripping and disturbing prologue.  I found myself engrossed in the stories, while also fostering a growing affection for Nick.  Despite my own nagging fatigue, I continued reading late into the night, wondering what would happen next.

“The Midnight Queen” focuses on the suspicious behaviors of the women who reside within the gated community of The Elysium Cove.  Nick, searching for his missing brother, has stumbled upon the Cove, an exclusive enclave with residents consisting of chiseled men and their buxom wives.  Everyone is gorgeous and flirtatious.  Despite the hormonally charged atmosphere, none of the couples have children.  Also, the husbands have a habit of disappearing and/or dying.  Nick wonders if there is a connection between these men and his brother.  He also wonders why he blacks out whenever he is alone with the women, and whether the sexually explicit, yet sinister dreams he has are actual memories.

“Post Mortem Adventures” picks up a thread from “The Midnight Queen” regarding a creature that has a precise and organized killing spree.  It hunts for a period of eighteen months, taking three victims within nine days before moving to another area to take three more victims in the requisite nine day period.  It then disappears for twenty-seven years.  The creature attacked three people while Nick was in Montreal investigating The Elysium Cove, and it eventually began taking victims in his home town of Bitternest, Louisiana.  Nick is enlisted by a mysterious man named Jim Coffin to help him find the creature before it disappears again.  This concept of a cyclical killer is interesting, and Draven wisely has his characters state what horror fans will recognize as a similar twist from the movie Jeepers Creepers.

Draven knows his horror.  He seasons dialogue with allusions to Carpenter, Hitchcock, and even the Mystery Machine (ok, it’s not horror, but I had to smile at the follow-up mention of Scooby Snacks).  He alludes to Lovecraft and literary characters, as well as real-life serial killers.  This added an element of fun to the read; it was like a scavenger hunt of horror film and fiction history.

The only flaw, and it would be minor for most readers, is that there was incongruence between the plot and the writing style.  Whereas the action was delivered judiciously, there were descriptions and dialogue that felt superfluous.  Discussions of the weather, drink recipes and the like seemed to serve little purpose.  The dialogue also perplexed me when characters from Louisiana and Montreal used the greeting “top of the morning.”  Perhaps I was missing an inside joke.  I wished for a more fluid exchange between characters and more succinct language to match the thrills and scares that were conjured by a writer so well-schooled in the horror genre.

That said, I would gladly join the Draven fan club.  Nocturnal Offerings was wildly entertaining.  It provided chilling escapism along with a healthy dose of sex and violence.  I also hope that I have not seen the last of goofy, inappropriate and heroic Nick Kubrick.  I would look forward to returning to Nick’s beloved 1971 Plymouth Barracuda for another ride.