Nobody Gets Out Alive – Movie Review 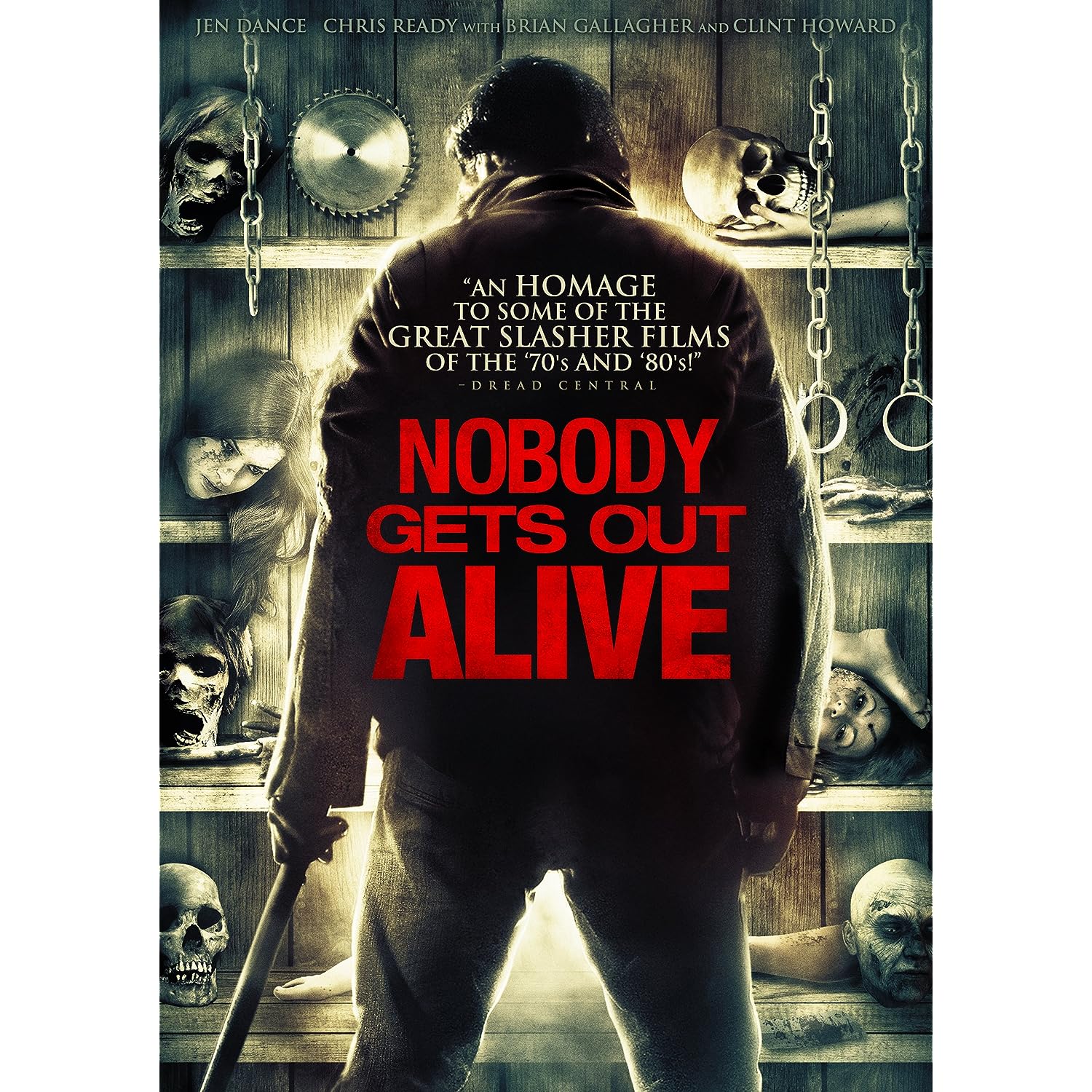 NOBODY GETS OUT ALIVE – DVD review

On the cover of this DVD is a blurb from one of those horror websites that seems far more interested in pandering to movies with an overly favorable quote in the desperate attempt to make it onto the DVD cover than in giving an honest review of that movie.  The blurb in question here is this: “An homage to some of the great slasher films of the 70s and 80s.” Obviously, whoever wrote that has never seen a 70s- 80s slasher film, great or otherwise.  Other than having a guy with a knife in it, this film could not be further from a 70s or 80s slasher flick.

Yeah, as you can probably tell, I did not like this movie. Not one little bit. But here, let me tell you some of the reasons why.

In those great slasher films that this movie so badly wants to be, there was a nice mix of characters. There was the stoner/practical joker/comic relief, and there was often a vapid bimbo, but the majority of people were nice or good or at the very least, folks you could relate to and like. Moviemakers back then did that so when the victims met their untimely end at the end of some maniac’s knife, you felt bad. And yes, there was usually a (as in singular) jackass/douchebag in the group that you were supposed to not like.  When that person got the slice and dice treatment, the audience actually felt good about it, or at the very least, not so bad. But in this film, as is the case with far too many recent horror movies, every character is reprehensible. You never feel anything toward these cardboard cutout characters except scorn and malice. Never once do you think “Hey, I could see myself in this situation, hanging out with these people” or at least I hope to god you don’t.  If these people remind you of your friends, you desperately need better friends. Honestly, there was not one character I cared a wit about in this entire movie. Not. One.

Those bygone great slasher films almost always had an effective and memorable villain. No, not all of them became as iconic as Jason, Freddy, Michael, Leatherface, or later on Ghostface, but they usually had something to offer. A cool look, a signature weapon, a unique style, a neat gimmick, or they were just truly, really frightening. Something. Anything. The slasher in this turkey has unbuckled galoshes. Yep, that’s it. Oh how frightening. Other than that, he is a dull as dishwater. Now since it can be argued that the crazy slasher is the star of the show in movies like this, what does not-scary-in-the-least galoshes man tell you about the rest of this thoroughly uninspired film?
<!–[endif]–>

In those 70s and 80s slashers (sorry, but this flick wheeled that dead horse out, so I’m going to beat on it) there was usually some rhyme or reason to the killer’s madness, even if it was really insane. Here, the killer’s daughter gets hit by a drunk driver, so he goes into the woods to start killing anyone he meets. That’s it; he’s a completely normal guy one minute, and a murderous maniac living in the woods the next. Furthermore, he’s out in the woods for years without killing anyone (as none of the locals living around the woods know about any previous murders, disappearances, or anything strange ever happening) and then one day out of the blue he shows back up looking like Tom Hanks at the end of Cast Away with a sledgehammer, a knife, and his oh so frightening galoshes. This does not make the killer mysterious or scary, it makes him a non-entity, a paper-thin villain with an unbelievable motivation. This is a huge fault with the story, or more correctly, there is no story. It’s as if a slasher film didn’t consist of anything more than a guy with a knife stabling people in the woods. That does not sound like a loving homage to me; rather it’s a cynical cash in by people who don’t really get it.

The acting in this movie is atrocious. You know, back in the 70s and 80s, you got the sense that most movies actually tried to do the best they could with the best people they could get. Sure they didn’t always succeed, but at least they tried. Because even cheap films back then cost a lot, those making the movies, both in front of or behind the camera, usually had some experience or skill at making movies. Now that is often not the case as anyone can pick up a cheap video camera, go to the local community college drama department, and hire anyone willing to work for pennies. That honestly feels to be the case with this movie.

Oh dear lord I could go on and on listing the ways this film utterly failed, but if I did that I’d be here all day. So here are some more highlights of the low points of this very bad flick in rapid fire mode.

In this flick the kills are lackluster in the extreme. In a good slasher movie the murders are the payoff, like the punch line of a joke. They’re either set up with suspense and tension, so that even a “tame” (read as bloodless) kill feels like a million bucks, or they’re gruesomely memorable in some way. This movie does neither of those things. There is no nudity in this movie. In and of itself that’s not a huge thing but (A) it does the ‘girl in her bra tease’ of the nude-less nineties slashers that I just hate (I would rather have none of that at all than that watered done weak sauce) and (B) if you’re going to market yourself as an old school slasher, than you had better behave like an old school slasher, and that includes some mindless titillation from time to time. The dialog is stilted and sounds forced. It is also grating and repetitious. Want to play a drinking game that will give you alcohol poisoning in no time flat? Take a drink every time someone in this movie says ‘seriously’. Oh and for some reason this flick takes a dip into torture porn towards the end. Yeah, because when I think of classic slashers from the 70s and 80s, I think of torture porn. Lastly the direction is serviceable at best, basically coming down to pointing the camera in the general direction of the actors, hitting the record button, and then moving on. There’s not a once of style or flair to be seen in this entire movie.

OK, I’ve crossed over the thousand word mark long ago on this stinker, and since it doesn’t even warrant half that amount of effort, time to wrap this one up. Nobody Gets Out Alive is not a good film. It’s not a scary film. It is not an homage to anything. It is populated by poorly written and acted characters you don’t care about. The killer is about as memorable as a random homeless man. The story is nonexistent and the direction is bland. It is a direct to DVD dud not worth you time and certainly not worth your money. Avoid this one.