No One Lives – Film Review 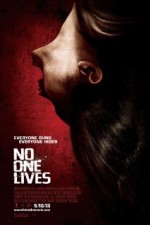 Japanese director Ryûhei Kitamura has an impressive resume of film. Although I’m not overly familiar with the body of work that began his journey (outings such as Versus), I – like many others – stumbled upon this unique talent after being exposed to the genuine horrors of The Midnight Meat Train. With an arsenal of very Kitamura techniques at his disposal (stylish hyper-kinetic camera movement and offbeat angles, among others), we all watched in awe as he faithfully brought Clive Barker and his vision blazing into the new millennium. An adaptation that is now legendary for not getting the treatment it deserved – one wondered whether the overall experience had shattered Ryûhei somewhat. Would he still want to pursue such outlandish monsters in the aftermath? Or would he perhaps try to find a safer path to success? Thankfully the former was chosen, and with No One Lives our director has chosen a script from first time writer David Cohen that again raises the bar and gives us a lofty and unique perspective of horror.

Right off the bat, I was not impressed with the misleading advertising poster (it’s too evocative of the Hostel sequel years previous). Although there are a few facets of torture and clout here, No One Lives by no means falls within that sub-genre. That said, most aficionados are well aware of a studio’s attempts to hinder or negatively market a final product – so with that brief warning sticker attached we can proceed with the story at hand.

The journey begins as many others in the genre: in true slasher fashion, a young woman is stalked through suburban forest by an unknown assailant using sophisticated equipment. Before being apprehended, she leaves a cryptic message of her continued existence … bread crumbs for those in authority who may be looking for her. Scene two – and we have more familiar genre territory: a seemingly normal couple are negotiating the highways with some serious luggage in tow. The unnamed pair have made a decision to ‘relocate’ and begin a new existence. Although their motives are not clear, it appears our charismatic male is certainly the one at the controls of this adventure. When they stop off at an out-of-the-way motel to recharge, we are then treated to some cryptic dialogue that seems to raise more questions than answers. We do have some revelations at hand, however – and through cobbled together news stories have ascertained the missing young woman is the offspring of society’s elite. After finding her breadcrumbs intact, the call goes out to secure her freedom and life.

Switching gears, the audience is then introduced to a gang of modern thieves in the midst of a large scale mansion heist. Quicker than expected, it’s soon ascertained that pilfering and burglary are just some of the crimes this cabal entertains when the vacationing family unexpectedly show up. In the aftermath, the two factions cross paths in a small diner that sets off a chain of interlocking events that entails a major and unpredictable twist … a happening that simply cannot be revealed here. And although the couple find themselves the target of these outlaws, a killer emerges that will dwarf them all leading to a cat and mouse showdown in the thug’s lair where anybody is potential prey.

Without revealing this predator or the secret that’s loosed, I will say the rest of the film follows a steady enough formula of revelations and imaginative kill sequences. Holed in like rats, the criminal gang have finally met their match. Giddy with the twist – and by now relishing the outing – I was somewhat disappointed when various flaws began to appear … chief among them characters breaking the cardinal rule of an intelligent horror film: acting stupid. With a killer having already displayed near invincible prowess, that does not stop the injured and maimed trying to escape in the most foolhardy way possible – simply walking out the front door. It’s here, unfortunately, that the sophistication slips around the edges. Thankfully the second half is salvaged by key moments of flashback detailing our heroine’s plight – sequences that give rise to philosophic undertones and ask pertinent questions concerning evil and its motivations.

I know all this sounds outwardly confusing – like a mash-up of very different genres barely related to each other – but with all plot points revolving around the major twist, what looks messy on paper actually comes out sharp. Altogether, Ryûhei Kitamura has delivered a very unique and dark experience: an amalgamation of two disparate plot lines shoved together with enough force that the generated heat melds the elements. Recommended.