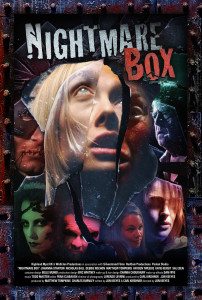 On Thursday, January 9, NIGHTMARE BOX will be playing at 7:30pm at the Laemmle’s Music Hall 3 in Beverly Hills, California. Director and writer Jon Keeyes, producer and co-star Matthew Tompkins, star Johanna Stanton, co-star Hayden Tweedie and composer Todd Masten will be in attendance for a Q&A following the screening.

Tickets should be ordered in advance via http://www.tugg.com/go/03fdqe

The trailer can be viewed at the official website at http://nightmareboxmovie.com/

NIGHTMARE BOX is the horrifying story of a woman that wakes up in a room with no idea who she is, where she is, or how she got there and she must unravel the mystery of her identity before the room and its strange inhabitants destroy her.