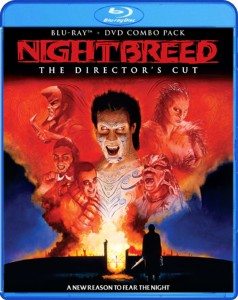 This one is legendary among horrorheads since the day it came out in 1990. “The Star Wars of horror movies” it was called by those with the gift (curse?) of hyperbole. Clive Barker’s monster opus based on his novella, Cabal, is a more accurate description. And then what we got was a bit of a mess. Oh to be sure, the film always had its fans, a devoted cabal that would ensure the movie’s cult status, but writer/director Clive Barker’s own opinion of his movie was far less than favorable, and for good reason. According to him, the movie was meddled with from the start by the studio who just didn’t get what he was going for with the film.

Even as uneven as it was, Nightbreed was still a good, but not great, movie. It was the story of a guy named Boone who thought he was a monster, so he sought out a city of monsters in the wilds of Canada called Midian where he could be with his own kind. However, poor Boone was lied to by his psychologist, the real monster of the movie; a psychotic slayer of families, played to chilly perfection by David Cronenberg. Yes, that David Cronenberg, the director of Scanners, Videodrome, The Fly, and many more awesome movies. Anyway, Boone is embraced by the monsters of Midian, the Tribes of the Moon, and the evil shrink, Decker, gets a whole town of rednecks all worked up over killing some “freaks” hiding out at the local, and about city-sized, cemetery. The same huge cemetery that Midian can be found underneath. So it pretty much becomes a war between mankind and the tribes of the moon, and it’s pretty easy to see which one Clive Barker thinks are the true monsters in his movie. Also, the whole story is pretty much a thinly veiled allegory for Mr. Barker’s own struggle with accepting his homosexuality, but even if you don’t get that part, it’s still a fun monster mash.

Some years after the movie bombed at the box office, a reengage version of the film started making the rounds at the horror cons. Called “The Midian Cut” it had a lot of the stuff that was left on the cutting room floor from the original put back into the movie. Now some of that stuff did help Nightbreed be a better movie, but some of that was cut out the first time for good reasons. So while The Midian Cut was better than the original, I never thought it was all that amazing, either.

That brings us to this edition, the first and only authorized Director’s Cut. It adds about 45 minutes of footage, but it doesn’t just make the old movie 45 minutes longer, as some of the stuff that didn’t work in the original has now been removed. So whereas the original ran 102 minutes, this version is 120 minutes long and makes for a far better, more enjoyable, and complete film. No, not everything added back in is absolute gold. There are more bits with the gun-toting, scene chewing, over the top with dimwitted evil cops that really doesn’t add anything to the movie. It was a safe bet anyone watching the older version of the film knew they were the bad guys, and these new scenes had me rolling my eyes more than anything else. That said, it is a minor gripe, and if I have to sit through a scene or two of a comically bloodthirsty deputy licking a garrote wire (no, really, that’s in here) to get all the other good parts back in the film, not to mention a far better ending, that’s a small price to pay.

Befitting a release of this magnitude for the diehard fans, Scream Factory has loaded it with some pretty awesome extras. First, there is an introduction to the new cut of the film by writer/director Clive Barker himself and restoration producer Mark Alan Miller. Those two team up again for a new audio commentary track for this cut. There is “Tribes of the Moon” a making of doc that runs an hour and twelve minutes. “Making Monsters” is an interview with several of the film’s makeup effects artists that’s a nice, chunky 42 minutes long. “Fire! Fights! Stunts!” is a look at the 2nd unit and how important they are to the film, and that runs just over 20 minutes. Lastly there’s the good, old, dependable theatrical trailer.

Nightbreed: The Director’s Cut, is the version of this film that the fans have been waiting for. It’s not the bootleg Midian cut that has been making the rounds for years, this is the movie as close to how Clive Barker wanted it and it’s a much better film then what came before. For fans of the original film, this version is very highly recommended. For everyone else, give it a shot and I’m betting you’ll dig it too. For all those, it’s recommended.