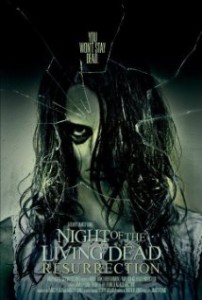 Night of the Living Dead: Resurrection

As I have stated in other reviews, I am tired of filmmakers using titles to well-known films in the hope that it will draw attention to their own low budget efforts, be they good or bad. It is a backhanded attempt to get the public’s money and I find it abhorrent.

Many films have tried this trickery on the movie going public lately and most have been complete trash, save for a couple. A Haunting in Connecticut 2: Ghosts of Georgia is a good example. I did not like either film but the point is that the title to the sequel is misleading. The sequel has nothing whatsoever to do with the first film. There is neither a reference nor familiar character. The filmmakers made an underwhelming southern ghost story and, to make a buck or two, the distributors added the title of the original, as it made a small profit. It is true false advertising to the consumer. Call Ralph Nader!

Now we have the British take on the Romero zombie film, Night of the Living Dead: Resurrection. This film claims to be “based on the film by George A. Romero” and firmly plants itself in that universe. I am here to tell you that this film… is very, very, good.

Directed by first timer James Plumb, NOTLD:Resurrection is a slow burn of a film. Made on a very small budget it still manages to be frightening and original.

We immediately realize that we are getting a sort of remake of Romero’s classic as we see one of our “main characters” named Ben, a 30ish black man in a white shirt completely modeled after Duane Jones in the 1968 film. He stumbles across a car that looks abandoned. He is driving around the countryside searching for his lover named, in yet another nod, Barbara. Ben needs to get gas so he tries to open the gas tank but is thwarted by the zombies inside the car. His reaction is stoic but scared and the actor, Sule Rimi, plays the scene with Jones’ mannerisms.

As Ben drives we are treated to radio broadcasts of scholars and DJ’s arguing and trying to figure out the zombie outbreak. There is a broadcaster who is instructing people how to properly dispose of a dead body. The dialogue is nearly word for word as it was spoken in the original film by the local sheriff.

The scene is a nice nod and there are many others in the first half hour such as Ben’s phone screensaver is the original ad photo for the 1968 version, a shot of a corpse that is an exact replica of the same shot from the original, and music cues that are spot on imitations of the Romero film. All of these moments are handled with respect and are effective and fun for fans to experience. The filmmakers have a really smart sense on how to handle their material.

Ben soon arrives at a farmhouse in the country. Seeking shelter he goes to the porch in the hope of someone alive being inside. I must warn you, the following statements will contain a major spoiler. If you do not want to find out something major that happens, skip to the next paragraph. Ben looks in through the mail slot and, in a nod to the original film’s ironic ending, is shot in the face and killed by a shotgun blast! It is a shocking, original, and unexpected moment. Here endeth the spoilers!

The director then shifts to his own zombie film, mostly leaving behind his update of Romero’s original. The rest of the film follows a family who tries to survive the night in the midst of the zombie attack.

Here Director Plumb brings his own take on the theme of humans being much more dangerous than the monsters they are fighting. He does well with the family patriarch, played by Terry Victor, who is willing to shoot a person before he knows whether or not they are one of the “crazies” as he calls them. There is also a subplot involving random teenage thugs who will soon attack their house just as the zombies are beginning their onslaught. I believe this to be a reference, ever so slight, to Romero’s Dawn of the Dead where our heroes in the mall are infiltrated by the motorcycle gang which in turn unleashes zombie Hell.

One thing that Director Plumb and his co-writer Andrew Jones handle so well is the human drama. There are many unresolved personal issues between the members of this family and they are forced to deal with all of them as the zombies attack. The actors, mostly British first timers, bring weight to the film as they are uniformly great in their roles, especially the mother, played by Kathy Saxondale. She is a bundle of worry as her father lies dying in the next room. Saxondale is perfect as she tries to hold her family together while knowing what her father may become when he dies. As with the best horror films, the human drama here is as strong as the terrors and that makes for a perfect balance in a genre film.

The filmmakers had no budget and, unfortunately, it shows in many night scenes. There are many shots that are too dimly lit and a few scenes of dialogue that are somewhat inaudible. As far as I can tell, these are the only two negatives concerning this surprisingly entertaining film.

The zombie scenes are handled with care and pack a wallop, as do the scenes of human on human violence. The gore is as good as any bigger budgeted production. The music is effectively creepy with its old school synthesizer style. The acting is very good and the direction and screenplay are tight and surprising.

Director Plumb’s respect and knowledge of the horror genre is evident in nearly every moment and he is truly someone to watch. His next project, a remake of the 70’s slasher film Silent Night, Deadly Night, is set for distribution later this year and, even though I despise the original, I will be anxious to see what spin Plumb can put on the material.

If you are a fan of the zombie genre and good horror in general, seek out this film. Night of the Living Dead: Resurrection is the announcement of an interesting filmmaker that seems to have his own voice; a rarity in modern horror films.