NIGHT OF THE DEMONS – Blu-ray review 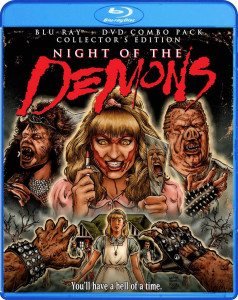 NIGHT OF THE DEMONS

I LOVE THIS MOVIE! And now it’s on Blu-ray. There, stop reading and run, don’t walk, to get this new Blu-ray from Scream Factory when it comes out February 4th.

Are you still here? Why? I mean come on, it’s Night of the Demons! Eat a bowl of f*** and get this perfect example of how fun, funny, gory, and yes, even scary horror movies could be back in the 1980s. Yes it is that damn good.

What, you need more convincing? Oh, maybe you’ve never seen Night of the Demons? Well, that’s got to be the case, because if you had ever seen it, you would know how it is made from 100%, Grade-A awesomesauce. Son in that case, come along, I have an invitation to a Halloween party you sure as hell don’t want miss. It’s going to be a real scream. Bwah hah hah hah hah hah!

Now if that bit of silliness above puts you off, you might want to stop reading right here. This movie is nothing but that kind of silliness, and I love it for it. It is all that is fun about Halloween and horror movies. If you can’t have some fun with your fright flicks, then I feel really sorry for you, but this won’t be the movie for you. If this does sound like your kind of party, well you’re in luck; this is one of the best Halloween bashes ever.

As for the story, it’s pretty simple. Some kids get together in a big, old, spooky, rundown former funeral home for a Halloween party. Once there, thanks to some séance monkey business the partiers get up to, they call up some demons from hell who possess one of the kids. That’s when the stalking, killing, and fun really begins. If that wasn’t bad enough news, each person who dies comes back as another demonic murder machine. That means as the number of living kids dwindle, so do the chances of the others surviving this Night of the Demons. And really, that’s it for the story, but remember that simple doesn’t mean bad. After all, it could be said that Jaws is just about a big fish eating people, and Psycho is only about a guy with mommy issues.

What really sells this movie are the wonderful, over the top characters, the gore gags, and the direction by Kevin Tenney. Working back to front, Mr. Tenney already proved he’s got the horror movie goods with Witchboard, and while this is a totally different movie than that one, his mad director skills are still on display here. The kills are suitably bloody, and the party goers turned mutilated, deformed demons look wonderfully horrific. Sensational, splatter highlights include some thumbs through the eyes, a couple screwing in a casket (because why not) getting mashed, a tongue-chomping kiss, and the infamous lipstick through the nipple scene. No, really. As for the characters, they run the gambit from the horror movie cliché book, and that’s fine with me. There’s the sugary sweet good girl, the tough Italian guy with the Brooklyn accent (despite this film taking place in California), the scared black guy that knows better than to mess around with black magic crap, and more. However there are three characters that are head and shoulders above all the rest. There’s the blond bimbo played to perfection by scream queen extraordinaire, Linnea Quigley. There the Goth before Goth was a thing girl who got the party together, Angela. Played by Amelia Kinkade, Angela is sexy, smart, creepy, and does a memorable dance number to Bauhaus’ Stigmata Martyr that has never left me. But by far my favorite character is the loud, gross, obnoxious, and hilarious Stooge. Yes, his name is Stooge, and not only does he live up to that moniker, but actor Hal Havins steals the show in every scene he’s in.

The new Blu-ray from the amazing Scream Factory is actually a Blu-ray/DVD combo and it comes with a reversible cover that has some new art on one side, and the classic poster on the other. Before we get to the goodies on the disc, let me say that man oh man does this movie look amazing on HD. Even if you’re not a fan of BD extras, this movie is worth the upgrade for that alone. Now back to those extras. There are two audio commentaries on here. One is brand new with director Kevin Tenney, actors Cathy Podwell, Billy Gallo, Hall Havins, and special make-up creator, Steve Johnson. The second commentary once again has director Tenny, producer Jeff Geoffrey, and executive producer Walter Josten.  There is a making of featurette called “You’re Invited” that runs an impressive one hour and twelve minutes and it jam packed with interviews and info. Speaking of interviews, there is a separate one with Amelia Kinkade who played the memorable creepy chick, Angela. This is also an impressive 22 minutes long. Actress Allison Barron has a 4 minute short where she shows off some of her personal pictures from the shoot. There is the theatrical trailer, video trailer, TV spots, radio spots, a behind the scenes photo gallery, a special make up effects photo gallery, and a posters and storyboards gallery. This is one release that sure doesn’t skimp on the special features.