Night of the Comet – Blu-ray review 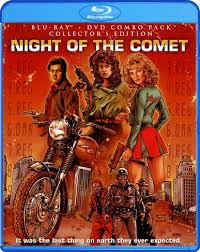 Night of the Comet

If you googled “they just don’t make movies like that anymore,” chances are good this movie would pop up. This bubbly, bright, fun, and yes, even sometimes frightening movie is a perfect time capsule of what made horror films from the 1980s so good. It’s always been one of my favorite flicks, and now, thanks to Scream Factory, it is out on Blu-ray and DVD. But just because I love it, that doesn’t mean you will. So if you have never seen Night of the Comet before and you want some more convincing before you pluck down your hard-earned money for it, keep on reading. For those who have already seen it, then you know how good it is. Feel free to skip on down to where I cover the nifty new features in this release.

1986 was the year of Halley’s Comet long return, and so there were a few movies made that decade that featured comet shenanigans. This is one of them, where a comet “not seen since the time the dinosaurs went extinct” (hint, hint) comes around and everyone on planet earth is partying in true 80s style. Well everyone except for Regina and Samantha, two valley girl, teen sisters who miss the big event for different reasons. Lucky for them, they did, because everyone who didn’t is turned to dust by the cosmic visitor.

The two girls wake up to find themselves alone with all of Los Angles as their deserted playground. Well, not all alone. There might be a few other survivors out there, somewhere, and then there are the not quite so lucky ones. Those that didn’t get poofed into dust right away and have become slowly drying out, murder-crazed, sort-of-zombies. Oh and then there are the remnants of the government, but you know they’re only here to help, right?

So Night of the Comet is an end of the world zombie film as seen through the eyes of two hip, fun loving, boy-crazy, girls that love to shop. It’s got thrills, chills, a thoroughly 80s sensibility, lots of laughs, some ghoulish baddies, and one heck of a great soundtrack. If that doesn’t sound like a good time to you, then you don’t know what a good time is.

This awesome Blu-ray/DVD combo pack from the equally awesome Scream Factory comes nicely stuffed with extras. There are three, count them, three commentary tracks on here. One with the stars of the show; Catherine Mary Stewart and Kelli Maroney. This was by far the best of the three commentaries, but the others aren’t bad either. There’s another one with the director, Thom Eberhardt, and the third is with production designer, John Muto. There is a dual interview with the valley girls, Catherine Mary Stewart and Kelli Maroney that runs 15 minutes and is a load of fun to listen too. There is another one with the leading man of the movie, Robert Beltran that’s about 13 minutes long. There’s yet another interview with special makeup effects artist David B. Miller that’s 6 and a half minutes long. There are also two photo galleries, one is the traditional kind and the other is a behind the scenes gallery. Lastly there is a theatrical trailer found here.

As I said from the start, I love this slice of 1980s awesomeness. If fun, silly, bright, bubbly, and even at times pretty scary. The two leading ladies are lovely, there are a ton of quotable lines in it, everything has a great look, the soundtrack is very cool, and I just can’t stop saying it: everything is so wonderfully 80s. If you’re a fan of movies from that decade then this is a must have. If you’ve never seen it, then this is also a must have, as you really should watch it. Night of the Comet gets a very high recommendation from me. Get it for yourself on Blu-ray and DVD on November 19th.