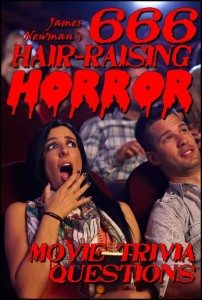 Ever been called a “weirdo” because you know more about NIGHT OF THE LIVING DEAD than you know about current events? Do people look at you funny because you have no interest in reality-TV but you can name every film in which Vincent Price appeared? Do you feel like an outsider because you’ve never cared about sports, yet you cheered at the top of your lungs when some kids played soccer with a severed head at the end of HOSTEL, PART 2? If you would rather visit Count Dracula’s castle than take a trip to the beach . . . if you’d prefer hanging out with Pinhead, having lunch with Leatherface, or babysitting for Rosemary instead of spending time with your real friends and family . . . this book is for YOU. Test your film knowledge with 666 HAIR-RAISING HORROR MOVIE TRIVIA QUESTIONS compiled from over a century of genre cinema!

Now available from Post Mortem Press, 666 HAIR-RAISING HORROR MOVIE TRIVIA QUESTIONS guarantees hours of fun for trivia-loving film fanatics who welcome a challenge. Covering the history of the genre from silent movies like NOSFERATU to modern-day blockbusters like THE CONJURING, no bloody stone is left unturned in this collection of questions divided into seven categories: Vampires, Zombies, Werewolves, Ghosts & Demons, Maniacs & Madmen, It Came From Another World, and Miscellaneous Madmen. In the end, fans will grade themselves against the “Who Will Survive . . . and What Will Be Left of Them?” scoring system, proving once and for all whether they’re “Just Another Victim” or a true “Master of Horror”.

About the Author: James Newman has been obsessed with horror since he was just four years old, when his father took him to see THE INCREDIBLE MELTING MAN. His published works include the novels MIDNIGHT RAIN, THE WICKED, ANIMOSITY, and UGLY AS SIN, and the collection PEOPLE ARE STRANGE. 666 HAIR-RAISING HORROR MOVIE TRIVIA QUESTIONS is scheduled for release on January 28, 2014. For more information visit: http://www.postmortem-press.com/666.php/, or the author’s official website: www.james-newman.com.