New Trailer for Dawn of the Planet of the Apes

Yeah, I know that this isn’t horror, but I’ve always been fascinated with the whole Planet of the Apes saga.  When the PR people sent this my way, I couldn’t resist posting.  Now that we’ve got that out of the way, I hope you enjoy it.

We are very excited to share with you a NEW trailer for 20th Century Fox’s highly anticipated film, DAWN OF THE PLANET OF THE APES. 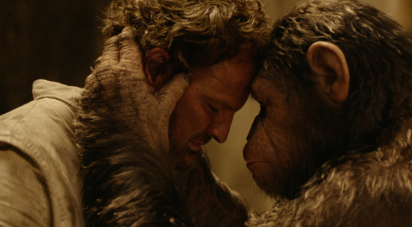 ————-
DAWN OF THE PLANET OF THE APES
Action-Adventure
Release: July 11, 2014, in 3D
Director: Matt Reeves
Screenplay by: Mark Bomback and Rich Jaffa & Amanda Silver, based characters created by Rick Jaffa & Amanda Silver
Producers: Peter Chernin, Dylan Clark, Rick Jaffa, Amanda Silver
Cast: Andy Serkis, Jason Clarke, Gary Oldman, Keri Russell, Toby Kebbell, Kodi Smith-McPhee, Enrique Murciano, Kirk Acevedo
Synopsis:
A growing nation of genetically evolved apes led by Caesar is threatened by a band of human survivors of the devastating virus unleashed a decade earlier.  They reach a fragile peace, but it proves short-lived, as both sides are brought to the brink of a war that will determine who will emerge as Earth’s dominant species.
DAWN OF THE PLANET OF THE APES Official Assets
https://www.epk.tv/view/#/campaign/dawn-of-the-planet-of-the-apes/
DAWN OF THE PLANET OF THE APES Official Socials
http://www.dawnofapes.com/
https://www.facebook.com/ApesMovies
https://twitter.com/ApesMovies
http://instagram.com/apesmovies
http://www.youtube.com/ApesMovies
https://plus.google.com/+ApesMovies/posts
http://apesmovies.tumblr.com/
#DawnOfApes