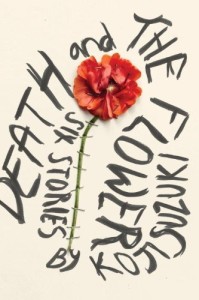 Before Koji Suzuki was the author of the Ring trilogy, horror fiction that became the source of some of the scariest movies ever made, he was a struggling writer, part-time tutor, and house-husband, rearing two daughters while his wife worked outside the home. The six

short pieces in Death and the Flower reflect this experience,showcasing both the author’s signature ta lent for writing taut tales of psychological suspense, and his ability to create deeply human, complicated characters who touch the reader’s heart and soul. Very

personal,and filled with glimpses into Suzuki’s own life, these stories are about the redemptive power of a father’s love, and how the connect ion between a man and his family gives him the strength to do whatever it takes to keep them safe.

In t he longest of the stories, “Beyond the Darkness,” a couple with a just-born baby moves to a new apartment, only to find out that they haven’t eluded a vicious prank caller. In “Disposable Diapers and a Race Replica,” a father who often puts himself at physical risk discovers some essential truths about himself after a close brush with death. In “Key West,” a father on vacation with his emotionally fragile daughter takes an impromptu swim that

calls into question what is — or is not – real. In “Irregular Breathing,” a father-to-be muses on the symmetry of his pregnant wife being on a respirator after she’s suffered a stroke. “Embrace” tells of a single mother who shares one night of comfort with a man grieving for his lost daughter. And in “Avidya,” readers meet a father who must put aside his hard-won serenity when his family is threatened.

Koji Suzuki was born in 1957 in a town outside of Tokyo. After graduating from university, he held numerous odd jobs including a stint as a tutor. The father of two daughters whom he reared as a struggling writer while his wife worked, he has authored books on child­ rearing in addition to his blockbuster Ring trilogy and other fiction. Edge, his previous work published in English by Vertical, received the 2012 Shirley Jackson Award.

Death and the Flower is Suzuki’s ninth work to appear in English. He is based in Tokyo but loves to travel, often in the United States.