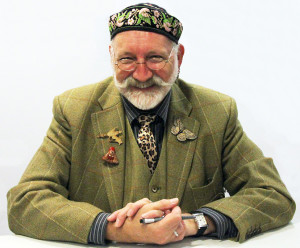 Stephen James Walker and David J Howe, Editorial Directors of Telos Publishing have acquired world rights to a new fantasy novel by bestselling author Robert Rankin. The novel, entitled The Abominable Showman, will be published in 2014.

‘We’re absolutely delighted to welcome Robert Rankin to Telos Publishing,’ said Howe. ‘I have admired and been a fan of his work for many years, and we intend to bring Telos’ commitment to quality and enthusiasm for good writing to bear, and to make the release of The Abominable Showman one of the most talked-about fantasy books of 2014.’

The novel concerns the celebration of Queen Victoria’s 90th year on the throne – and is set on a vast steampunk space liner in the year 1927. ‘The book embodies all that is loved and celebrated about Rob’s writing,’ said Howe. ‘It has a magnificent sense of the absurd, combined with characters which leap off the page. Rob’s fans are in for a real treat!’

‘I was delighted when we agreed that Telos Publishing would take this novel,’ explained Rankin. ‘I have long been an admirer of their catalogue of authors and books, and the enthusiasm and excitement that they bring to the publishing process. It’s something of an honour to join them in this adventure, with a novel of which I am very proud, and had a great deal of fun writing.’

Robert Rankin’s first novel, The Antipope (1981), introduced readers to the delights of Brentford and kicked off a series of novels set in that somewhat unassuming suburb of London. Since then he has authored 35 novels, and several illustrated books, many of which have been placed on bestseller lists. The Abominable Showman is his 36th novel. In 2009 Robert became the first Fellow of The Victorian Steampunk Society in recognition of his unique contribution to the genre. During 2012, Rankin self-published his first 23 novels on Kindle with new cover artwork, making them available to a new and wider audience. He lives in Brighton with his wife. https://www.facebook.com/robertrankin

Telos Publishing was formed in 2000 by David J Howe and Stephen James Walker, and since then has published novels and novellas by many authors including Christopher Fowler, Graham Masterton, Stephen Laws, Simon Clark, Paul Finch, Steve Savile, Kim Newman, Paul McAuley and Stephen Gallagher. They are also known for an extensive range of unofficial guides to film and television, including Doctor Who, Space 1999, The Rocky Horror Show, Battlestar Galactica, Tarzan and A Song For Europe. www.telos.co.uk

Please credit the image to www.duncanphotographic.co.uk.