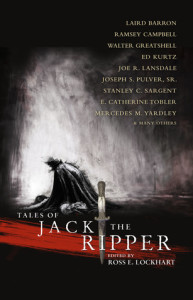 Before Hannibal Lector, Patrick Bateman, and Dexter Morgan, there was Jack the Ripper. The difference? Jack was real.

The story of Jack the Ripper captured lurid headlines and the public’s imagination, and the first fictionalization of the Ripper killings, John Francis Brewer’s The Curse Upon Mitre Square appeared in October of 1888, mere weeks after the discovery of Jack’s first victim. Since then, hundreds of stories have been written about Bloody Jack, his victims, and his legacy. Authors ranging from Marie Belloc Lowndes to Robert Bloch to Harlan Ellison to Roger Zelazny to Alan Moore have added their own tales to the Ripper myth. Now, as we arrive at the quasquicentennial of the murders, we bring you a few tales more.

From the editor who brought you The Book of Cthulhu comes Tales of Jack the Ripper, a collection of seventeen stories and two poems from many of today’s darkest dreamers, including Joe R. Lansdale, Ramsey Campbell,
Laird Barron, Ennis Drake, Silvia Moreno-Garcia, and many more.

about the editor
Ross E. Lockhart is an author, anthologist, and editor. He is a veteran of small-press publishing, having edited scores of well-regarded novels of horror, fantasy, and science fiction. Called a “master of the literary mixtape,” Lockhart edited the acclaimed Lovecraftian anthologies The Book of Cthulhu I and II. He is the author of the rock-and-roll novel Chick Bassist. Lockhart lives in an old church in Petaluma, CA, with his wife, hundreds of books, and Elinor Phantom, a Shih Tzu moonlighting as his editorial assistant.