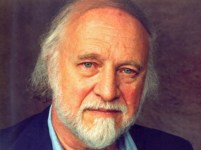 A number of years ago publisher Barry Hoffman had the honor of visiting Richard Matheson’s home in California. Matheson has cabinets in half-a-dozen rooms with treasures Gauntlet Press has published. They thought they had everything (other than a few scripts), but Matheson has found two wonderful items.

The most significant is a completed novel he wrote either before or just after he penned Hunger And Thirst (he’s not sure just when he wrote it). It’s a tale of sexual obsession. Gauntlet Press is pleased to be publishing a signed limited edition in 2013 (the only version of the book to be published).

In the same volume they’ll also include a journal Matheson recently found that he began writing in the 1990’s, put down, and then added to in 2003-4. If you thought that Generations, his most recent new novel, was his most autobiographical work, wait till you see this. He talks in his journal about his youth, his family, his writing career and much more.

As soon as contracts are signed and Gauntlet Press provides more details, we’ll pass them along. Matheson will initial tipsheets for the numbered copies of the book and sign his full signature for a 52-copy lettered edition.