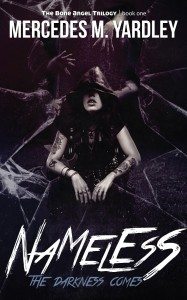 Nameless (Book One of the Bone Angel Trilogy)

Little girls and demons. These are a few of dark scribe Mercedes M. Yardley’s favorite things, which is a welcome treat for the author’s fans. Our main character, Luna Masterson, although she shares most of the basic things in common with ass-kicking urban fantasy heroines, thankfully doesn’t share their machismo and desire to try too hard to be “one of the guys.” Yes, she can see demons, and both hunts and kills them, but she doesn’t do it to “look cool,” which is a refreshing change from a sea of copycat urban fantasy heroines who in most cases lack very much in the way of character development.

Luna has been seeing demons from an early age, as the reader finds out from the prologue in a scene that’s both startling and yet also hilarious. She sees demons who form from the shadows, something she seems to have inherited from her father (Luna’s mother and brother don’t have this ability). Luna’s father also paid a hefty price for his abilities, and the apple doesn’t fall far from the tree. From the outset, Luna is on a crash course to destruction and if she isn’t careful, she could end up the same way as her dad.

Seth, Luna’s brother, is bewildered by his sister’s abilities for the most part, and is trying to pick up the pieces of his life after his wife, Sparkles (you guessed it, she’s a stripper) takes off, abandoning both him and their baby girl, Lydia, who often refers to Luna as “Mama Luna” which, given the circumstances, one can’t really blame the child for doing so.

Demons abound at every turn, and even though it seems that at least one thing might be going right for Luna when she meets Reed Taylor, who eventually becomes her boyfriend, the poor girl can’t seem to get an ounce of peace. The plot moves forward at a fast pace, establishing that Luna has a demonic Mark on her back, which is basically a beacon that’s kind of like GPS to show demons exactly where she is. Although demons usually have to be invited into a place, “dumb demons” do wander in from time to time.

In the second half of the book, everything ramps up and accelerates with things spinning out of control for Luna, who must make some very difficult, agonizing decisions to overcome her outer–and inner–demons.

Fans of Mercedes M. Yardley’s work will have no trouble gobbling up her first novel-length work, and it is definitely good news that there will be two more books forthcoming in the series from Ragnarok Publications. Although it’s an urban fantasy novel, it involves demon hunting, and there’s plenty of action and fight scenes to go around, the novel is inflected with Mercedes’s unique voice, which shines through in each of her works, and sets this one apart from the pack.

If you want something different from your urban fantasy from a wildly inventive and imaginative author, do pick up a copy of “Nameless.” You won’t be sorry.