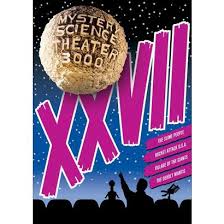 In case you’re a young’un and missed out on it the first time around, or have been living in a pop culture coma for the last couple of decades, here’s the 411 on Mystery Science Theater 3000 (AKA: MST3K). It was a wonderful TV show that ran from 1988 to 1999 about a guy marooned on the Satellite of Love. Stranded way up in space, he had to watch cheesy B-grade movies as some sort of deranged experiment. In order to survive his mind-numbing ordeal, our hero made some robot friends and together they make fun of, or “riff on”, all the bad movies. As simple as that sounds, something that fans of bad movies have done for just about forever, it was revolutionary to see it on television, not to mention hilarious. So much so, that even all these years after its last episode aired, it still has a strong cult following, is constantly name dropped by comedians, and lives on in two distinct incarnations today. Check out Rifftrax.com and Cinematictitanic.com for more info on both of those.

Thankfully the good people over at Shout! Factory have continued to put out the original television show on DVD for years. This four pack is their latest offering and it’s a must have for fans of offbeat comedy and low budget, usually horrible genre fans. Their latest box set is MST3K: XXVII, or for those who don’t do Roman numerals, that’s 27.

This set has a nice mix of cheesy movie goodness in a variety of flavors. For monster movie fans like me, the highlight here is The Deadly Mantis, a big bad bug movie that I grew up watching on the Saturday afternoon creature features. I truly love this bit of 50s sci-fi goodness, and that love was in no way dampened by Mike and the bots making jokes at its expense. In fact, I loved this episode and it now ranks up as one of my favorite MST3Ks. As for the feature flick, it’s about a giant praying mantis that gets released from its prehistoric glacier prison thanks to a volcanic eruption. Once freed, the big bug starts looking for folks to eat. Yeah, it’s as good as it sounds for classic giant monster lovers.

Another classic genre flick, The Slime People from 1963, was one of the very early MST3K episodes. So you’ll get Joel leading the bots in their silly cinematic shenanigans, and things will look and sound very different from the MST3K you know and love. That said, it is still side-splitting to watch the riffers take on a flick about a post-apocalyptic L.A. overrun by the titular underground baddies.

Village of the Giants stays in the 60s, but returns Mike to the head of the jokesters. It’s a trippy teen flick where a group of juvenile delinquents eat some alien stuff that causes them to grow 40 feet tall. Once they are literally the big men and women on campus, the towering teens takeover the terrified town. Yeah it’s as silly as all that, and the perfect target for the MST3K treatment.

Last, and in this case least, is some 60s Cold War propaganda with Rocket Attack U.S.A. To be sure, this bit of anti-Commie spy/thriller action is a bad, bad movie, made better (or at least watchable) by Joel and the joke bots tearing it apart. However it is also the weakest of the four episodes in this collection and was the one that produced the fewest laughs per minute from me. Still, Mystery Science Theater is like pizza; even when it’s not great, it’s still pretty damn good.

Mystery Science Theater 3000: Volume XXVII is a great collection. For MSTies (that’s what we diehard fans of the show call ourselves) this one is a no brainer. If you’ve never seen MST3K before, then this four pack would be is a great way to start. This boxed set comes out July 23. Consider it highly recommended.