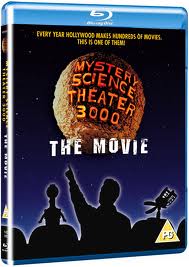 If you have followed my reviews at all, then you no doubt know all about my love for the TV show, Mystery Science Theater 3000, or MST3K for short. This show was way ahead of the curve when it came to comedy and was highly influential for many professional funny men and women making people laugh today. But did you know that MST3K made an honest and for real movie for the theaters back in 1996? Now I wouldn’t be surprised if you didn’t. Thanks to Universal, the clods that were bankrolling the film, it had only a very limited release. It also has the grimy paw prints of executive meddling all over it, but the end result was still Mike and his laugh bots, Tom Servo and Croooow, riffing on the 1955 sci-fi flick This Island Earth and yes, it. Was. Good. Well now Shout! Factory, the people responsible for continuing to bring MST3K out on DVD, have now released Mystery Science Theater 3000: The Movie (snappy title, huh?) on Blu-ray and DVD combo pack. So grab your favorite bad movie buddy, we’re taking off to the Satellite of Love.

Essentially it is an episode of the MST3K show, but only with a bigger budget for the sets and the gags Mike and the bots get up to during their breaks from the feature film. And that film, inside this film, is none other than the 1950s sci-fi flick, This Island Earth, a movie that is ripe for the riffing. It’s the one where jet pilot – slash – scientist, Dr. Cal Meacham is contacted by the peaceful, big foreheaded, white haired, ‘yep I’m so totally not an alien’ alien, Exeter. Exeter and his alien buddies are reaching out to human scientists to aid them in their planet-destroying war. There’s spaceships, death rays, and bug-eyed mutants. In short, it’s got all the classic sci-fi tropes and it’s the perfect film for the MST3K crew to skewer for our entertainment. Thankfully, they do that with style. Is this the very best example of the MST3K experience? No it’s not, but it is still a lot of fun and very funny and that’s all the matters to me.

This new Blu-ray/DVD combo pack from Shout! Factory looks great. In fact, it perhaps looks a little too good. You see, this movie was never meant to be seen in HD and now on crystal clear Blu-ray you can actually see a bit too much, such as the wires used to move the bots around. It’s really no big deal, but I did think it was kind of funny. Anyway, on to the extras. There is a featurette aptly named “The Making of MST3K the Movie” that is really only a 5 minute video press release. Yeah, the title of the thing is actually longer than the featurette. Another impressively titled extra is “MST3K the Movie: the Motion Picture Odyssey.” Thankfully this is a more robust 33 minuet long behind-the-scenes and retrospective. I really like this featurette as it was not only entertaining (no surprise, coming from MST3K) but surprisingly candid and very informative as it had a lot of inside info on the TV show, the movie, a laundry list of executive meddling from Universal that almost crippled the film, and ideas for a grander film that sadly wasn’t to be. There is another featurette called “This Island Earth: 2½ Years in the Making” that runs 36 minutes and is a serious look at the mocked movie within this movie, This Island Earth. For fans of classic sci-fi, like me, this is a great extra. Deleted scenes and the theatrical trailer are also on this disc.

If you are a Mistie (a fan of MST3K) or a lover of classic sci-fi then this is a must have. Yeah it’s not the greatest episode of the show we all love, but it does deliver the comedy goods more often than not. It is also the best looking MST3K production to date, in scope if not size (it is actually a kind of short film) and the HD transfer looks great. Consider this one well recommended.