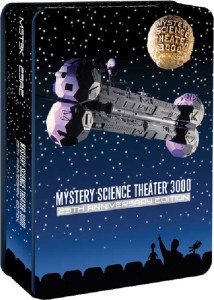 Mystery Science Theater 3000 (or MST3K) was a TV show that ran from 1988 to 1999 about a guy marooned on the Satellite of Love way up in space. Trapped and all alone, he had to watch cheesy B-grade (or often Z-grade) movies as some sort of deranged experiment. In order to survive his mind-numbing ordeal, our hero made some robot friends and together they make fun of, or “riff on”, all the bad movies. As simple as that sounds, something that fans of bad movies have done for just about forever, it was revolutionary to see it on television, not to mention hilarious. So much so, that even 13 years after its last episode aired, it still has a cult following, is constantly name dropped by comedians, and lives on in two distinct incarnations today. Check out Rifftrax.com and Cinematictitanic.com for more info on both of those.

Thankfully the good people over at Shout! Factory have continued to put out the original television show on DVD for years. Now they bring us this 25th Anniversary Edition with four classic episodes out on disc for the first time, and two that were out on DVD before, but are now out of print. If that was not enough, they took all that, added a bunch of nice extras and special features, and put it all into a cool collectible tin case. But is it worth a buy? Well keep on reading my fellow Misties, and let’s find out.

This set has a nice mix of cheesy, horrible movie goodness in a variety of flavors. For us horrorheads and monster fans there’s the 1960 horror/sci-fi romp The Leech Woman and the 1961 UK take on Godzilla known as Gorgo. While Leechy is only really watchable with the MST3K treatment, Gorgo is actually a pretty fun giant monster flick in its own right. For straight up sci-fi fans there’s Moon Zero Two, which is also from the 60s, albeit from the end of the decade and not its start. The last flick that’s new to disc here is a bit of 1950s Finnish fantasy fun called The Day the Earth Froze. The two MST3K classic reprints found here are two of the show’s best and funniest episodes in my opinion. They are sci-fi epics of science and decapitation; The Brain that Wouldn’t Die, and the 70s Joe Don Baker action flick, Mitchell.

As for the extras, Shout! Factory has included quite a few in here worth shouting about. There are four mini posters included in this cool tin box, one for each of the movies new to DVD. There is a brand new doc on here about 25 years of Mystery Science Theater 3000, how they began and where the people involved with the show are now. There is a special about the making of Gorgo (as done by MST3K) and one about the last episode to feature Joel Robinson as the human guinea pig stranded in space. There is a “Life After MST3K” look at the funny lady in the MST3K mix, Mary Jo Pehl. There is also a collection of “MST hour wraps” here. You know, the intro and mid-show bumpers that would run before or after commercials.

Mystery Science Theater 3000: 25th Anniversary Edition is a great collection. It really has a bit of everything: horror, sci-fi, fantasy, and lots of comedy. For Misties like me, this one is a no brainer. If you’ve never seen MST3K before, then this ‘a little bit of everything’ sampler is a great way to start. Consider it very highly recommended.