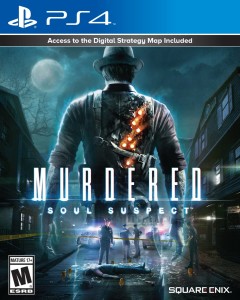 The chances of you being murdered by a serial killer, becoming a member of the dearly departed unable to crossover until you complete your unfinished business and teaming up with a psychic teen to solve your own murder (while preventing others from being murdered) are not very likely. So, if that sort of scenario tickles your fancy, why not live (and die) vicariously through Murdered: Soul Suspect?

You take the controls as Ronan O’Connor, a rough and tough detective on the mean streets of Salem armed with a troubled past and a devil-may-care attitude. You’re hot on the path of the Bell Killer, a notorious serial killer targeting young women around town. Just as you’re about to bust the perp and close the case, he kills you. Bummer.

However, before you can ascend to the pearly gates and reunite with your wife, Julia, you have some unfinished business to attend to. The case of the Bell Killer still needs solving and you find yourself navigating your ghostly presence through Salem’s haunted avenues, tracking the clues of the killer and following odd hints left around town by Abigail, a mysterious ghost girl who seems to know more than she lets on about the afterlife. As you piece together memories of your murder and the life you once had, your path crosses with Joy, a young girl on the search for her missing mother who just so happens to be able to communicate with the dead and also happens to be the next target on the Bell Killer hit list. The two of you join forces on this plain and beyond to uncover the truth about the murderer before he claims Joy as his next victim.

The game definitely has its positives, one of most prominent being the atmospheric streets of Salem. Each location within town (the usual suspects: church, cemetery, mental hospital, police station and museum) is nicely detailed which helps to add a heavy tension as you hone your new ghostly abilities and meet others in similar states of being. Random ghosts also appear throughout the entire game, always off in the distance of wherever you may find yourself and as you approach them, they promptly disappear. They serve no purpose other than to add to the ambiance and it comes off as a nice, spooky touch.

Starting the game, it’s difficult to remember that you are, in fact, a ghost and can walk through some walls and objects. The game tries to set ground rules as to what can and cannot be passed through by outlining the latter in a ghostly white hue. Regardless, I found myself heading towards doors more often than not. The developers did create a great way to showcase which walls are passable – the spiritual residue of others lingers on said walls, casting what looks like a salt water stain on them. It’s a great reminder that you are, indeed, otherworldly and that a wall is no longer a solid object in your present state.

The most disappointing aspect of this game is how easy it is. When I play a game, I want a challenge. I expect the blind fury that comes from trying over and over and over to beat a boss or puzzle and failing miserably until the only resolve that remains is cursing the day and Googling the walkthrough. That, and I expect to die. A few times. For me, it’s a half-decent game if it takes a few restarts to figure something out. Murdered only has two main threats – pits of hellfire with demonic hands reaching to pull you down if you happen to step on them (hint: don’t step on them) and demons. The demons are pretty creepy when you come across them and their ear-splitting screeches for the first time. Your job is to avoid them and, if you can, kill them. You can achieve both by hiding within the floating plasma sacks of others (similar to the leftover residue on the penetrable walls), which act as camouflage from the hellions. Once you’re inside a plasma sack, only then does the demonic creepiness dissipate. They look like they’re jogging in slow-motion, wind breezing through their satanic cloaks, one theme song short of running on the beach a la Chariots of Fire. To kill them, it’s as simple as running up from behind and grabbing them. If you try a frontal assault, they’ll see you and you’ll have to play a spectral game of hide and seek within the plasma sacks until they give up and go back to getting their slow-mo jog on. And that, my friends, is as tough as this game gets. Even the final boss requires less effort from the player than it does to take down a demon.

The side quests in Murdered require you to collect a certain item multiple times throughout each individual location. If you collect all the items, a story specific to that item is revealed. Yes, it’s as dull as it sounds considering the main story also requires you to collect evidence and other items. Also, Abigail, the ghost girl you first encounter after death, leaves cryptic drawings in the streets of Salem and around some locations for you to uncover, and just like everything else, finding the drawings becomes a chore. You can also pick up moments from Ronan’s past in your hunt for the Bell Killer, an attempt to make our hero a more relatable and sympathetic character, but again, collecting item after item gets awfully tedious.

The replay value of Murdered is not the greatest. The game runs like a straight line from A to B, offering no real reason for the gamer to dive back in, other than to collect side quest items you may have overlooked originally (I applaud your patience, if that’s something you choose to do). The short length of the game is also off-putting, having finished the main quest and some of the side quests in about eight hours.

The best part of the game is its concept – it’s imaginative, spooky and, at times, enjoyable, but the qualities are overshadowed by the lack of difficulty, low replay value and short length of gameplay. Murdered is an RPG that relies more on story than action, so if you’re the type that enjoys blowing stuff up and doing some murdering of your own, the chances of you getting a kick out of this game are as probable as the storyline itself.