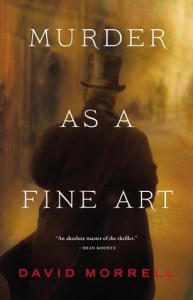 Murder as a Fine Art

Two weeks ago I wrote that Joe Hill’s NOS4A2 was probably the best horror novel of 2013.  Well, David Morrell’s Murder as a Fine Art is probably the best police procedural/serial killer/historical thriller to hit the shelves this year and probably this decade.  It blew me away and had me reading each page as quickly as possible, wanting to find out who the killer was and how he would be dealt with.

As most readers are probably aware of at this point, David Morrell’s first novel back in the seventies was First Blood.  This was the book that first introduced the character of John Rambo to the public.  I remember reading that book and shouting out in amazement when the Sheriff and his posse discover that Rambo is a former Vietnam Green Beret, holder of the Medal of Honor.  My wife at the time entered the room where I was to see what was wrong.  I told her that Rambo was a Green Beret and that the Sheriff’s men were toast.  She looked at me like I was crazy.

It was First Blood, and then the movie, Rambo, that made a name for David Morrell.  After that he wrote twenty-four novels, many of them landing on the New York Times Bestseller List such as Totem, The Brotherhood of the Rose, The Fifth Profession, Creepers, and now Murder as a Fine Art.  This may be the book that finally overshadows First Blood and ends of being Mr. Morrell’s finest achievement with the written word.

Murder as a Fine Art takes place in 1854 London, England and begins with the brutal murder of five individuals inside a clothing shop.  It isn’t long before the general public becomes aware that the slayings are a direct imitation of the murders that took place in the same vicinity during 1811, or are they?  Could the real killer still be alive and have come back to replicate his earlier masterpieces.  You see, the tragedy of 1811 was written about by the infamous Thomas de Quincey in his essay, Murder Considered as a Fine Art.  De Quincey is also well known for his first book, which was a memoir titled Confessions of an Opium Eater.  It’s even possible that de Quincey’s writings may have inspired a new killer to copycat the earlier murders.  Or, as the police believe, de Quincey is the actual serial killer, who has come back to London to relieve his first creation forty-three years before.

Detective Ryan and Constable Becker (who wants to become a detective) investigate the killings and soon discover that de Quincey and his daughter, Emily, are in London.  The two policemen question the possible suspects, only to realize that someone could be using the writings of de Quincey to throw suspicion upon him.

Realizing a good thing when it’s thrown into his lap, Detective Ryan decides to use de Quincey as a consultant to help him and Becker find the murderer before more killings can take place.  Of course, they have to go against the explicit command of the most powerful man in England, who wants de Quincey arrested on grounds of suspicion.  The two police officers, however, have minds of their own and suspect they’re on a time clock because the real murderer wants to destroy all of London as his final piece of art.

David Morrell’s newest novel is one of sheer brilliance that incorporates his two years of research to bring 1854 London alive in the reader’s mind.  His adds a large number of facts about the citizens and city that are never boring, but rather intriguing and profound in what they represent to the modern man.  In many ways, I would call it a history lesson that excited me with information I wasn’t aware of, and I have a BA Degree in History from college.  More so, the information that Mr. Morrell conveys brings realism to the story and its many characters.

The writing, of course, is professional in every sense of the word, flowing with ease like a spring meadow through the forest.  After more than thirty years of writing, Mr. Morrell knows how to use words to tell a great story and build characters that shine with authenticity.

There was one chapter in particular that mesmerized me for its entire length.  It was the one where the past history of the killer was revealed and the time he spent in India, smuggling opium into China for the British East India Company and killing the ritualistic Hindu Thugs, whose method of killing was strangulation with a knotted rope.  I studied the Thugs in college and was always intrigued by their devotion to Kali, the Goddess of Destruction, and how they were able to kill in such silence with their knotted ropes.  The chapter Mr. Morrell wrote was utterly fascinating.

It should also be pointed out that many of the characters in the novel are based on actual people who lived during that period: Thomas de Quincey and his daughter, Emily, John Williams, Lord Palmerston, and others.  This certainly adds to the story and its vivid description of murder at its worse.

If you’re interested is fantastic reading for the end of the summer, then buy yourself a copy of Murder as a Fine Art.  It’s just come to my attention that David Morrell is busy at work on a sequel to this great book.  Highly Recommended!