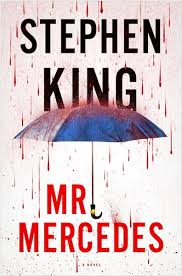 After reading Mr. Mercedes, I’ll never view a Mercedes-Benz in the exact same way as I use to.  This novel certainly gives new meaning to the term, “Luxury Sedan”.

Anyway, it’s easy to forget that besides writing horror fiction, Stephen King also creates psychological suspense thrillers and what I would probably call hardcore drama.  Just think about some of his novellas and novels over the last three-and-a-half decades.  There’s The Body (a.k.a. Stand By Me) or The Shaw shank Redemption or Cajon or even one of his newer novels, Joy land, and you’ll get a good idea of what I’m talking about.  For me, Mr. Mercedes would more-than-likely be classified as a psychological suspense novel because it deals with a serial killer who uses a Mercedes Benz to crash into a crowd of job seekers, killing eight and injuring dozens more.

Yes, this is definitely Stephen King at his best.  It makes me wonder if the author actually has a Mercedes Benz in his garage.

Now, onto the story.

Brady Hartsfield is crazy as a dingbat and knows it.  To everybody else, however, he appears to be a quiet and rather polite young man who knows how to fix computers and sells ice cream to the little kiddies.  Still, he occasionally has to scratch the itch in the middle of his back to keep from getting any crazier.  He does this by killing people.  The act of murder seems to help him alleviate the stress of day-to-day living, along with the rather close relationship he has with his mother, a single parent who depends on her Honeyboy.

One early morning at the civic center in town, a large crowd of job seekers begin to line up so they can attend the job fair.  Unknown to them, they have a more important role to play as Brady drives a large Mercedes into the crowd, killing and maiming dozens of jobless people.  It’s really the most fun Brady has ever had and it makes him tingle all over in outright happiness.  There’s nothing like running over a few bodies and killing men and women and even a little baby, to bring a lively smile to his handsome face.  Heck, this may even be why God created the Mercedes Benz.  It handles perfectly over rough terrain as any luxury sedan should.

Well, by a sheer stroke of luck, Brady manages to get away with the mass murders and to escape back into oblivion.  The two detectives who take on the case (Kermit William Hodges and Pete Huntley) do their best to track down the killer, but they fail to take in the most important clues and end up chasing their tails.  Then, Hodges finally retires after a long and honorable career with the force, leaving the unsolved case behind.

A year comes and goes, and Brady decides to stir up a little mischief.  He’s been watching Hodges for a while and now decides to have some fun at the retired detective’s expense.  He sends him a letter and taunts him about the case that was never solved, hoping the old man will commit suicide.  Unfortunately for our young serial killer, the letter has the opposite effect.  Instead of causing Hodges to eat a bullet, it gives him a new reason to continue on with life.  He wants to catch Mr. Mercedes in the worst possible way and to hand him over to his former partner, hoping for a little recognition for a job well done.

Brady, however, isn’t so easy to catch and soon comes to the conclusion that it might be more fun to take out hundreds of people, instead of fooling around with a single, decrepit, retired detective.  In other words, Brady wants to show the ex-cop that he’s nothing but a loser.

One thing leads to another with an array of interesting characters making an appearance, and it soon becomes personal for Bill Hodges.  He changes his goal and now wants kill the mass murderer before he can injure anybody else.   It’s going to be a race to the finish line as both men follow their own unique paths in pursuit of the other, knowing the specter of death is waiting around the corner.

As I said earlier, Mr. Mercedes is Stephen King at his best.  This is an author who has progressively gotten better over the last forty years (if that’s even possible for a writer of King’s caliber). There are authors out there who make more money and write even more novels than Stephen King, but soon the world will recognize King as the greatest author of the 20th Century.

King knows how to grab the reader and then ring his neck like a chicken for dinner.

Mr. Mercedes is definitely a winner from this fabulous author who probably scares himself as often as he does the reader with his carefully chosen words and dark-loving mind.  This is a novel not to be missed, but rather savored like a fine French wine.  I’m not talking Ripple, either, but rather a fine Beaujolais or Bordeaux.   Last, this is also a story that needs to be told on film.  I can think of fewer things more frightening than laying in a parking lot and watching as a huge Mercedes drives straight at your unprotected face.

Needless to say, this novel is highly recommended!