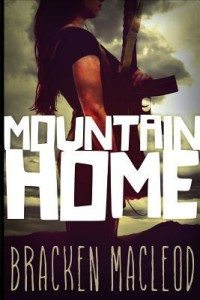 Books of the Dead

Most of us can’t actually white-knuckle an entire rollercoaster ride. We eventually realize centripetal force is going to be the same whether we hold on or let go. Bracken MacLeod’s Mountain Home reminds how plenty say form and function are inseparable and that dark words should jangle mysteriously—but others want more stripped down storytelling. The scariest parts of MacLeod’s debut succeed because of gory realism and how he skips flourishes. There might not be a lot of centripetal force, but the knuckles stay tight and white. As such, this novel explores how violence actually occurs in the real world, shining a bright, angry light on how animosities twist inside the guts of most of us.

Mountain Home is a story about a sniper attacking a restaurant, but it’s not about people getting hit by bullets: it’s about people afraid of getting hit. Throughout, it’s hard to know how to feel about the siege—but that’s how life is and it’s something soldiers face. Right or wrong gets tricky when you shoot people. The book juxtaposes the terrifying and the mundane, and the behind-the-scenes restaurant details don’t always make the story more exciting, but the juxtaposition works beautifully when applied to survival tactics and military strategy. Along with those part and parcel challenges, ducking into most of the characters’ thoughts is hard despite how Stephen King can make it look easy—yet Mountain Home manages to balance a large cast with a measured objectivity that’s similar to Andrew Vachss or Jack Ketchum. If you love those writers and the premise of a sniper attacking a restaurant, it’s hard to go wrong with this one.

The book examines what makes us into time bombs while also being a story about how people cope. The relentless aesthetic of the movie Se7en comes to mind despite the stories having little in common. There’s also what some would go so far as to call a “pornography of violence” and a lurid voyeurism similar to real-life survival tales—but there’s a method to the vengeance: we see the lengths people go to for survival. Real-life terror lets us see who people really are…

With a book like this, it’s hard to start with a bang when the goal is to show how and why the explosion started. Figuring out where to begin is usually the toughest call. A slow burn can bore people, even when that kind of linear chronology can also make a book coil tighter—but the linear chronology means a writer can barely reveal character or plot through flashbacks. And a book about trauma and PTSD needs flashbacks. Clinically, almost every character evidences PTSD symptoms, even from the beginning, and grave mental or physical trauma comes to pretty much all. At their worst, books like this start to feel like “Spam in a cabin” where you cheer for Freddy or Jason…but this book’s full of the kind of violence where nothing good comes from the violence, which feels surprisingly authentic. In many ways, Bracken MacLeod’s Mountain Home is about the many reasons why people end up hating each other…but it’s also about the ties that bind us.