Mothership: Tales from Afrofuturism and Beyond Now Available 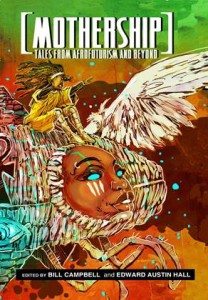 We try to let you let you know of projects out there that may not be getting much mainstream press.  This is one of those.  It is edited by Bill Campbell & Edward Austin Hall and released by Rosarium Publishing – www.rosariumpublishing.com

“I was also struck by Bill Campbell’s Mothership: Tales from Afrofuturism and Beyond, which again is very strong.”  — Lavie Tidhar, author of The Violent Century and editor of the Apex Book of World SF anthology series

“And next up I’m looking forward to reading Mothership: Tales from Afrofuturism and Beyond, which I want to plug because it is, in my opinion, on the cutting edge.”– Sarah Hans, editor of the forthcoming anthology, Steampunk World

Steadily, word is starting to spread about the ground-breaking anthology, Mothership: Tales from Afrofuturism and Beyond. This speculative fiction anthology includes the works of such award-winning and best-selling authors as Junot Diaz, Victor LaValle, Lauren Beukes, Tobias Buckell, N.K. Jemisin, S.P. Somtow, Eden Robinson, Vandana Singh, Rabih Alameddine, and Linda D. Addison; the genre-starting work of Charles R. Saunders; the genre-defying writings of Darius James and Greg Tate; as well as exciting,  new writers like Carmen Maria Machado, Chinelo Onwualu, Jaymee Goh, and Tade Thompson. Literary awards from the Pulitzer Prize to the Bram Stoker are represented in this collection as well as every land from both hemispheres. Truly diverse and truly spectacular, Mothership has most definitely taken off.