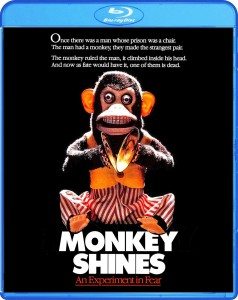 When someone mentions the films of George Romero, chances are good few people remember this 1988 effort. It’s not as good as his masterpieces like his original …of the Dead trilogy, nor is it as bad as some of his later efforts, like Bruiser or, you know, his last few …of the Dead movies. It is often forgotten or just overlooked, and that’s a shame, is it is an effective little psychological thriller. It’s probably one of the lest horror-centric of his movies, other than say, Knightriders, but it is fine film, well made, and could possibly be the definition of “hidden gem” for many horror fans out there that might have had this fly under their radar. Okay, that’s enough of me monkeying around, let’s get down to business.

This movie is about an athletic young man named Allan, who one day has a horrific accident and ends up quadriplegic. Depressed to the point of suicide, strings are pulled to get him fast-tracked for a new program pairing up disabled people with helper monkeys. Yes, before helper monkeys appeared on The Simpsons or South Park, they were in this movie, but I digress.

Now what takes this touching story into the realm or terror is the secret tests Allan’s best friend has been doing with the monkey in question, Ella. It seems that he’s been doing the mad scientist bit with Ella, trying to increase her intelligence, including, but not limited to, injecting her with human brain cells, and the end result is that Allan and Ella develop a weird psychic connection. That means Allan can sometimes see through his monkey’s eyes, and she can feel all the rage he has inside about his accident, and those that had wronged him. And while Allan is unable to act on his animalistic urges of revenge due to his physical, not to mention societal, restrictions, cute little Ella is not bound by either limitation. Before you know it, those that have wronged Allan are meeting fatal accidents at an alarming rate.

Basically Monkey Shines is a Dr. Jekyll and Mr. Hyde-like tale, where Alan is the trying to be good Dr. Jekyll, and the monkey is the little, fuzzy, and surprisingly deadly Mr. Hyde. The added element of Allan being so physically limited puts a nice wicked edge to the story, and there are some great scenes of suspense and terror in this film, as good as anything Mr. Romero has ever done. The movie also has a sad tinge to it, as the poor, murderous monkey is a victim in all this as anyone else. Of course, she is the one holding the straight razor, so…

Befitting a fine film like this is this new Blu-ray from the ever busy Scream Factory, that comes with a bunch of neat extras. First and foremost, there is an audio commentary with writer/director Romero, and I always enjoy those. There is also a new making of/retrospective featurette on the film that runs over 49 minutes. The film’s original ending can be found on this disc, as can a bunch of deleted scenes. Some on-set behind-the-scenes footage has been collected for this new release, as well as vintage PR material that was made back in 1988 to support the film, such as a brief making of piece, some short interviews, and a news story on the film. The usual trailers, TV spots, and a still gallery bring all this monkey business to an end.

If you ever heard of this movie and asked yourself “how could a cute, little monkey be scary?” well watch this flick and find out. If you’re a fan of Romero’s work, then this is a must have. If you like movies that blur the always murky line between horror and thriller, I think you’ll dig this film. For all those reasons and more, consider this release well recommended.