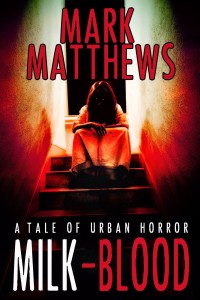 If nothing else, Milk-Blood is a unique sort of horror story. Its supernatural aspects meet the very real-life horrors of poverty and heroin addiction, and a good portion of it is from the perspective of a ten-year-old girl. It’s a short novel, but that belies the bleak depths to which it goes. The act the title refers to involves injecting the blood of a junkie to reap the benefits of the drugs coursing through their veins. This is a good indication of the sort of things you can expect to read about, and Matthews doesn’t pull any punches in the writing.

Lilly is a young girl who lives with her father and grandmother on a run-down street in Detroit, a street on which the houses are in perpetual disrepair and the people are much the same way. The two get by as best as they can with the specter of child protective service looming over their heads, and the promise of monthly food stamps and Lilly’s grandmother’s disability check. To make matters worse, Lilly has trouble fitting in at school due to a rare heart defect that renders her skin translucent. The bulk of the novella concerns Lilly trying to find her place in the world amidst all of this, while across the street a strange homeless man bides his time in a burned-out house and prepares to reveal his connection to Lilly and her dead mother.

Probably the most disturbing part of the whole thing is the heroin use, as it’s described in detail and directly affects characters you’d least expect it to. It’s a very dark story, grittier than the standard horror fare. Betrayal, neglect, and buried secrets and bodies alike are dragged out onto the page in a matter-of-fact prose style that doesn’t let up until the final word. The supernatural aspect forms the backbone of the whole thing, but it’s fleshed out by the realistic occurrences and motivations surrounding it. Some chapters are prefaced by seemingly audacious author’s notes (which seem intrusive at first), but by the end these fit into the whole tapestry as well, as a clever sort of postmodern flourish.

Although the gore is kept to a minimum, it’s not a book for the weak of heart, and some of its images and characters will stay with you. If this sounds like your kind of thing, it probably is. Milk-Blood is a tight, brisk read, and a vicarious trip to some truly chilling places. It’s fairly priced and well worth a read.