This one really caught my eye.  As a horror fan and former military guy myself…well, what’s not to like about this?  Throw in some amazing authors like Jonathan Maberry, Weston Ochse, Greig Beck, and James A. Moore and I couldn’t resist. 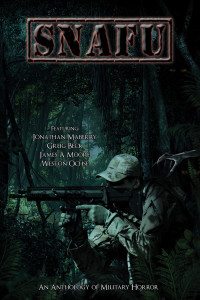 Welcome to Cohesion Press, a small press based in Australia.

Our first physical release will be SNAFU, combining four of the best writers of military horror into one anthology.

SNAFU will be an anthology of original military horror novellas and short stories.
Bioweapons unleashed, mutations, ancient species unearthed in lost caverns deep within the earth… and the soldiers who fight them.

We have solicited stories and novellas from some of the biggest names in the business for this release. There will be approximately 60,000 words by the solicited authors, with the remainder of the anthology filled by a submission process open to all writers.

James A Moore – James A. Moore is the award winning author of over twenty novels, thrillers, dark fantasy and horror alike, including the critically acclaimed Fireworks, Under The Overtree, Blood Red, the Serenity Falls trilogy (featuring his recurring anti-hero, Jonathan Crowley) and his most recent novels, Cherry Hill and Smile No More.

Greig Beck – Greig is an Australian author residing in Sydney with his wife, son, and an oversized black German Shepherd. Beneath the Dark Ice was Greig’s first novel. He now has many novels published in over ten languages, and his Alex Hunter novels regularly appear in the best seller lists.

Weston Ochse – Weston is an American author and educator. He has won the Bram Stoker Award® for Best First Novel and been nominated for the Pushcart Prize for his short fiction. His release, SEAL Team 666, is a bestseller, and the sequel, Age of Blood, has just been released.

Jonathan Maberry – Jonathan is a New York Times bestselling author of over 20 novels, comics and non-fiction works. His Joe Ledger Series regularly hits bestseller lists, and two of his series are currently being made into films in Hollywood.

We are currently running a preorder system with unique ‘pre-order only’ cover art, offering ebook, paperback, and two levels of signed/limited hardcovers.