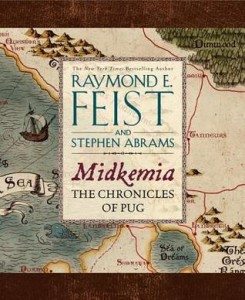 Midkemia: The Chronicles of Pug

It isn’t every year that a series of fantasy novels spanning thirty books over three decades comes to a close, but Raymond E. Feist’s Riftwar saga ended earlier this year with the publication of Magician’s End. To celebrate the series, Feist and Midkemia co-creator Stephen Abrams have produced a retrospective volume that summarizes the events of the Riftwar Saga.  The narrative conceit is that the work contains the magician Pug’s first-person journal entries, with annotations by his son Magnus. The books, originally derived from a campaign setting collaboratively developed by an RPG group at UCSD, are high fantasy with acknowledged influences from Dungeons & Dragons, J. R. R. Tolkien, and M. A. R. Barker’s Empire of the Petal Throne.

The result is a beautifully bound coffee table book with a paper slip cover. It contains over 50 full color maps and decorative elements by MinaLima Design, and is amply illustrated with original artwork by Steven Stone. The live action illustrations appear to be based on photographs of models compiled with computer-generated fantasy backgrounds. This creates a photorealistic effect that seems a bit at odds with the effort to present the maps and sketches of Midkemia in a way that mimics a more primitive or archaic style. In a few cases, the figures do not blend smoothly with the backgrounds but stand out against it as if on stage.

This is not a detailed atlas or encyclopedia of the worlds and events of the Riftwar books; fans looking for a comprehensive reference source will be disappointed. This is more of a travelogue, providing a condensed version of the events of the series. It should appeal to fans who have fond memories of the world and wish to revisit it with a slightly different perspective. Fans of high fantasy who are unfamiliar with this universe may find may enjoy the opportunity to discover a series that has been loved by many, but may not fully appreciate it as a stand-alone volume. The Riftwar books have appeared in many languages and sold over 15 million copies worldwide, and stand with A Song of Fire and Ice, The Belgariad, The Wheel of Time, and The Chronicles of Thomas Covenant as some of the most popular fantasy series of the modern era.