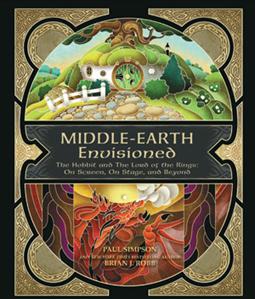 MIDDLE-EARTH Envisioned: The Hobbit and The Lord of the Rings: On Screen, On Stage and Beyond

The painstakingly crafted world that J.R.R. Tolkien created for The Hobbit, The Lord of the Rings, and The Silmarillion is so vivid that it’s easy to briefly imagine Middle-earth as a real place-even Tolkien himself had said it existed somewhere on Earth. From the languages spoken and the creatures that peopled it to the wars and cosmology, the richly imagined Middle-earth has left many artists and fans worldwide imagining what it would look and feel like to inhabit such a wildly inspired world. Tolkien left out no details in his picture so it is no surprise that Middle-earth has inspired such inventiveness in turn.

Middle-earth Envisioned is the first book to explore the artistic legacy left by Tolkien’s world. Paintings, drawings, theatrical performances, radio serials, and films inspired by The Hobbit and The Lord of the Rings are all discussed in a manner that further illuminates the brilliance of Tolkien’s creation. Readers will discover details surrounding an attempted Beatles live-action version (with Paul McCartney as Frodo Baggins), a nearly four-hour Canadian musical, the West End stage production of Lord of the Rings, and of course, the Peter Jackson films-including the Hobbit trilogy-and much more. In this beautifully illustrated gift book, discover the richness of Middle-earth anew, through the works of the artists inspired by it.

This beautiful book features the incredible artwork of Pauline Baynes, the Hildebrandt Brothers, Roger Garland, John Howe, Alan Lee and more.  Middle-Earth Envisioned also features—for the first time ever in print—the lost art of Mary Fairburn, the English schoolteacher whose paintings of The Lord of the Rings were favored by Tolkien himself.  There’s over 300 images in the book, all depicting the many dimensions of Middle-Earth

Brian J. Robb is a New York Times/Sunday Times best-selling author. Among his works are Timeless Adventures: How Doctor Who Conquered TV, A Brief History of Star Trek , A Brief History of Star Wars He has also written Silent Cinema Counterfeit Worlds: Philip K. Dick on Film (Titan, 2005), and Screams and Nightmares: The Films of Wes Craven (Titan, 1998).

Paul Simpson has written official guides to the TV series Farscape and Smallville and the movies The Hitchhikers’ Guide to the Galaxy and Wallace & Gromit: The Curse of the Were-Rabbit, as well as unofficial books on subjects as diverse as James Bond, Nicole Kidman, and the TV series The O.C. He wrote an unofficial guide to CSI: Crime Scene Investigation. A regular visitor to film and TV sets, he has reported for many newspapers and magazines, including TV Guide. For five years, he was the editor of the official licensed Star Trek Magazine. He wrote That’s What They Want You to Think for Zenith Press.

The Hobbit and The Lord of the Rings:

On Screen, On Stage and Beyond