Matt Spencer’s Novel, The Night and the Land, Released by Damnation Books 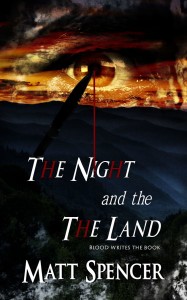 The Night and the Land, a Novel, Released on 1 September 2010

Matt Spencer, a Vermont writer, celebrates the Launch of his novel, The Night and the Land, a dark fantasy thriller
Among the local hippies and squatters of Brattleboro, Vermont, Sally Wildfire is on the run, hiding from her cruel, relentless family. She finds unexpected love with Rob, a bristly young man freshly awoken to alien sensations and ancestral memories of a long-forgotten realm…setting them both on a collision course with a brutal rite of passage, as the Wildfire family leaves a trail of mangled corpses on the road to Brattleboro.
__
Matt Spencer is the author of the novels Cult of the Stars (illustrated by Deirdre Burke) and The Drifting Soul (illustrated by Stephen R. Bissette), as well as, numerous novellas and short stories (including award-winners The Red Duke and Petticoat Lane), and the collection Shadow Ballads. Mister Spencer has been a journalist, New Orleans restaurant cook, factory worker, radio DJ, and a no-good ramblin’ bum. He’s also a song lyricist, playwright, actor, and martial artist. He currently lives in Brattleboro, Vermont.