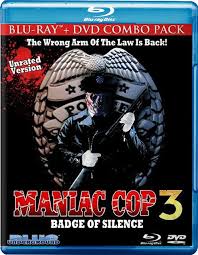 The third and final outing for the murderous maniac cop once again has director William Lustig and writer Larry Cohen teaming up to make a few more bucks from an idea that probably should have ended with the first movie, and really should have stopped at the second. This much cheaper looking and rather nonsensical outing is quite a letdown from the previous two. But I shouldn’t tip my hand too early on my opinion of this one I guess, so let’s play this one by the numbers. Coincidentally, that is also how this flick is pretty much does things.

This time out you get the murderous Matt Cordell, the titular maniac cop, once again returning from the grave thanks to some good old fashioned voodoo. At the same time a feisty female cop named Kate is shot during a hostage situation and left brain dead in a hospital coma ward. Matt finds out about this and of the coma cop’s nickname of “Maniac Kate”, and so begins a torrid (albeit one-sided) love affair right out of the Bride of Frankenstein playbook.

Returning for some more low budget goodness is Robert Davi as Det. Sean McKinney, because really, what else was Robert Davi doing? Here Davi’s detective was a friend to the now comatose Kate, so he’s looking into the events of her shooting in an attempt to clear her name of an excessive force charge. Not that it really matters at this point, but hey, whatever. Once the maniac cop steals the sleeping lady cop and brings her back to his voodoo doctor pal to bring her back for him, the detective must once again take on his old nemesis.

Really, that’s about all there is to this movie. There are a few creative kills here, but everything is awash in bland sauce that makes this film a tedious chore to sit through. Most of the actors sleepwalk their way through their performances, and no, I’m not just talking about the actress playing the coma patient. Even the team of writer Cohen and director Lustig seem bored with their own creation by now as the story is silly and the direction is uninspired, to say the least.

This new Blu-ray/DVD combo pack from Blue Underground has a few extras on it. There is a making of featurette called “Wrong Arm of the Law”, a few deleted and extended scenes, a trailer, and a poster and still gallery. So it’s not exactly loaded with special features, but neither is it a bare bones disc.

Maniac Cop 3 is so-so at best. No, it’s not a bottom of the basement slasher.  There are far worse movies out there, but this is far from a good movie or even an enjoyable one. Its most egregious crime is that it’s boring and feels tired. The Maniac Cop series should have never been a series. It was a good movie, an OK sequel, and now a pretty poor trilogy. This third time is not a charm and should only be picked up by the most maniacal of Maniac Cop fans.