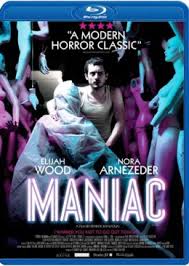 When I first heard about this remake of the gritty, grimy, notoriously controversial slasher from the 1980s, I must admit, I was less than thrilled. It’s not like I think 1980’s Maniac is some untouchable classic or anything, but (A) there was no need to remake it and (B) there was no way in hell Elijah “Frodo” Wood was ever going to be able to fill the huge, greasy, and downright icky shoes of the late Joe Spinell. But it’s sort of my job to watch movies like this with as open a mind as possible, so I took off the rose-colored nostalgia glasses and sat down to give this version of Maniac a look as tabula rasa as I could be. And you know what? I was pleasantly surprised to discover that this film is pretty damn good.

No, it’s not better than the original. Sorry, but that’s just a fact. Fire is hot, water is wet, and the original Maniac had a wonderfully dark and sleazy feel to it that is lacking in this a bit too slick remake. Also Mr. Wood is no replacement for Mr. Spinell who still owns this role. That being said, this is a very good movie and one I think would have been better served under a different title so that comparisons such as these would not be made. But it is what it is, and here that means this Maniac is a more than capable retelling of what is ultimately a simple story about a man with mother issues, penchant for psychotic visions, and some hideous, homicidal tendencies.

This time around, it’s Elijah Wood as the maniacal Frank Zito, and while he is a different kind of Frank than Mr. Spinell’s, he’s no slouch. Wood portrays both social awkwardness and psychotic furry very well. To his credit, Elijah’s Frank is far more sympathetic that the previous one. While Joe Spinell had the edge on creepy, you sort of feel that this movie’s Frank is almost as much of a victim as the woman he stalks and kills. Yes he’s still a reprehensible monster, but he’s a sad monster.

The story itself is a bit more fleshed out here. Frank’s history and psychosis are explored more in depth with special attention paid to his psychotic breaks that I thought was very well done. His love of mannequins is also explained and his romantic relationships not only get more airtime, but they seem more believable. While I think Joe Spinell’s Frank was an overall creepier killer, that was a bit of a double edge sword, and so his relationship with a beautiful woman in the movie was less convincing than Elijah’s similar relationship here.

Besides the different takes on the main character, what first sets this movie apart from what came before is the neat trick of having nearly everything on screen appear through killer’s POV. As if you are trapped inside Frank’s deranged mind, looking out through his eyes. This means that Elijah is actually seen very little in this movie, his face only appearing, for the most part, in reflections. Now this doesn’t work all the time, and in fact, in some parts of this movie the filmmakers depart from that trick on purpose, but I admire the movie for doing something different. The fact that they pulled it off as well as they did is a testament to their skill.

The next most notable thing in this Maniac is the wonderfully eerie music by Robin Coudert. Music is important in any film, but it seems like it can really push a good horror movie into the realm of being an excellent one if done right. See the original Halloween for an example of that. Here the film has electro-synth score that is both slightly bubblegum in a 1980s kind of way, while at the same time being eerie and disturbing. I have no idea Robin Coudert was able to blend those very different styles together so effectively, but the end result was wonderful.

As for the glorious gore that helped make the original movie so memorable, thanks to some groundbreaking special makeup effects by Tom Savini, this one goes back and forth with some very excellent (in a gross way) practical effects to some less than awesome CGI splatter. To be fair, the digital blood and guts here don’t look horrible, but they always seem like a cheat to me. Sorry, but I don’t think I will ever like it.

As for the extras on this new Blu-ray from IFC, there is an audio commentary with director Franck Khalfoun, star Elijah Wood, and executive producer Alix Taylor that I really enjoyed. There is an over hour long making of featurette that was not only informative, but fun in a way that many behind the scenes bits fail to be. In addition, a poster gallery, some deleted scenes, and a trailer can also be found on here.

This version of Maniac is the rare remake that is as good, or at least almost as good, as the original. While I liked some of the feel of the original a little more, that in no way diminishes the power of this film. Again, I wish this movie could have been called something else just so I didn’t always have the 1980 movie in the back of my mind while watching this one. That said, this Maniac is a damn fine fright film and one any horror fan should see. Consider it highly recommended.