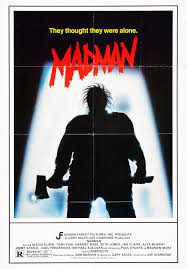 Friday the 13th, I spit on you. When it comes to the “slasher in the woods” sub-genre, you can’t beat what is probably the best of them all, 1982’s Madman.

The story is simple and familiar.  Sitting around a campfire at a summer camp, a story is told of Madman Marz who lurks in the woods waiting for his name to be called. If you call out to him, he will come and bring your fate with him.

Madman was a byproduct of the booming slasher genre started by John Carpenter’s Halloween in 1978 and Sean S. Cunningham’s Friday the 13th in 1980. Carpenter’s film is, of course, a true masterpiece and a classic horror film. Friday the 13th, while extremely popular, was a cash in, amateurish, and truth be told a really bad film.

After the success of those two films the flood gates were opened and between 1980 and 1987 tons of imitations overtook movie houses. Films such as He Knows Your Alone, Happy Birthday to Me, April Fool’s Day, Prom Night, Terror Train, and many more would try to capture the success of Halloween and Friday the 13th, but none came close.

Friday the 13th started the “slasher in the woods” subgenre and, again, there were many imitations such as The Burning, Just Before Dawn, Don’t Go in the Woods, The Forest, and so on. None would match the success of Friday the 13th, as that film kept coming with sequel after sequel that crushed all comers at the box office.

In 1982 Madman was released and played mostly the grindhouse theaters and drive-ins. There wasn’t much buzz about the film and it came and went rather quickly. Even on home video it never found the larger audience it deserved.

The film is very well structured and features good acting from a mostly unknown cast save for Gaylen Ross, who starred in George A. Romero’s Dawn of the Dead three years earlier. In this film she goes under the name Alexis Dubin for unknown reasons.

All of the actors fair well with their roles. Director Joe Giannone, and most of the cast, worked in the New York theater scene so he apparently knew how to work with actors, as everyone gives better performances than a film in this genre is used to.

The film begins with campers sitting around a campfire telling the spooky story of Madman Marz, a maniac who lives deep in the woods and, when his name is called, goes crazy and begins his slaughter. Of course someone calls out his name and the slaughter begins!

The character of Madman Marz is a good idea for a killer. He has a solid backstory, which I will not reveal, and is seen mostly in silhouette save for a few moments at the end when his face is revealed. Basically, he is a psycho hillbilly monstrosity with an unquenchable thirst for murder. I almost wonder if he was an inspiration for the character of Victor Crawely in the great modern slasher classic Hatchet.

The director starts the film by setting the perfect mood of doom and creepiness and never allows the film to stray from that path. In its look and style, the director and cinematographer James Lemmo, who shot the great Maniac Cop for William Lustig, breathe life into a genre that was quickly becoming stale. The scenes of Marz watching over his prey are frightening as he sits in trees and is shadowed by the rising moon, his messy white hair cutting through the moonlight.

As with all horror films there are the “jump scares”, but director Giannone does not overuse them, as he chooses to let the atmosphere scare us. It is a style that was and is lacking in low budget horror films.

I have always said that if you want to make a solid slasher film, someone must be killed with an axe. This film has that and more because Madman Marz does most of his killing with axe in hand. The kill scenes are not overly gory but do pack a wallop as they are built up with extreme tension and precision. This is no gore fest trying to imitate the films that came before it. This is a horror film handled by a director who respects the genre and wants to leave his own imprint. Sadly, the director never made another film and died in 2006 at the age of 60. I feel if given the chance at doing more horror films, Joe Giannone would have made a name for himself in the 80’s horror scene.

There are the normal flaws in this film as in most slasher films; characters, after hearing the story of Madman Marz, still go into the woods alone and act in ridiculous ways. These are things we cannot escape when entering in to this world and they do not hurt the film. Nothing takes away from the creepiness and terror that has been laid out for us from the first moments.

Madman has a true 80’s horror movie charm. It may not have the audience of the Friday the 13th series but it is better in every way.  It is better acted, written, shot, and scored, although I do give my one and only “props” to the Friday the 13th theme. It is original and very well done. Other than that, Madman stands above most 80’s slasher films.

My hope is that someday the film will find a wider fan base. It does have the smallest of cult followings and Anchor Bay did release a 30th year edition to DVD but I feel the film deserves more appreciation. Madman may not be iconic but it is a film that stands the test of time and is one of the best of all slasher films.