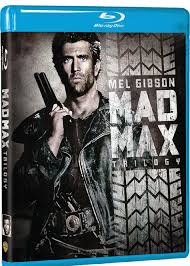 OK, this is not a horror movie, but can anyone out there deny that the Mad Max movies aren’t made out of 100% pure awesome? Well at least two of them are, and the third isn’t completely horrible. The first movie basically started the subgenre of post-apocalypse, car based flicks that were in vogue in the early and mid-eighties. It also put Australian films on the map for everyone outside of Australia. The first flick introduced the world to Mel Gibson and the rest helped make him a superstar long before he became a raving crackpot. The second movie, released here as The Road Warrior, upped the crazy car porn action by 1000% and gave us a huge, hockey-masked psycho a year before Jason donned his trademark look in Friday the 13th Part Three. As for the third in this trilogy, Mad Max: Beyond Thunderdome, well it is nowhere as good as the two that came before it, but it is still highly watchable, quotable, and fun.

In fact these three movies are so good and so well known that I know you know all about them already. But it is my job to give you at least the nickel tour of the trio and that’s what I aim to do. So grab your shotgun and get behind the wheel of your V8 Interceptor, we’re heading out to the wastelands to wage some wars on the roads.

All of these films are directed by George Miller and star Mel Gibson as Max. The story begins as the beginning of the end, it is a post-apocalyptic world, but one that seems to be happening in slow motion rather than the flash and bang of a nuclear holocaust. At least, that’s how it starts, but as the three movies progress, Max’s world gets worse and worse, and that fleshing out of the setting in each movie is just one of the things I like about these flicks.

In the first movie, Mad Max, our soon to be anti-hero is a baby-faced cop trying to hold onto his family and sanity in a world spinning out of control. His adversaries here are a thuggish motorcycle gang lead by The Toecutter. When Toecutter and his crazy crew kill Max’s wife and baby, that’s when he becomes Mad Max and a man out for revenge in the best Charles Bronsonian tradition.

The second film, Mad Max 2 (AKA in North America: The Road Warrior) shows that the world has now been reduced to a barren wasteland where the most precious substance is the gasoline that allows nomadic bands of murderers and rapists to keep on rolling. Here Max takes on his most memorable villain, a roided out, deformed, masked warlord called Lord Humongous and his motorized army of psychos. Max reluctantly agrees to help a band of survivors escape Lord Humongous’ meaty grasp, culminating in a truly epic, and twenty minute long, chase that blew all other cinematic car chases before it away and has yet to be outdone even all these years later. This movie alone is worth the price of admission for this set.

The third film, Mad Max: Beyond Thunderdome, is the least of the three in my (and many others) opinion, but it’s still largely an enjoyable watch. Here the world has even furthered degraded into a barbaric dark age. There’s radioactive fallout in the water, more giant mutants, and gasoline has been replaced by pig poop as the only remaining fuel. Perhaps the biggest misstep this movie makes is not giving Max a strong villain to oppose. The first movie had Toecutter and his gang. The second film had the awesome Lord Humongous and his army. Here we get Tina Turner as Aunty and a short guy with a mask on a stick to make him look taller. Yep, that’s it. And as if that wasn’t lame enough, Aunty isn’t even all that bad of a person. Sure there is awesomely named Master Blaster, and a pretty good fight in the titular dome of thunder, but even MB turns out not to be so bad, and one half of that equation is quickly written out of the movie. Come on, where are the villains we can love to hate? Oh and I almost forgot, Max gets to play babysitter/savior to a bunch of savage kids. Because that’s what these flicks needed, a kinder, gentler Mad Max.

This new Blu-ray trilogy comes in a neat steel book, and stuff like that always makes collectors happy. As for the extras, there are some, but not really loads. Mad Max has the same audio commentary and cool doc/retrospective that were on the last Blu-ray release. They’re both nice, but I would have liked to have seen a little something more. The same can be said for The Road Warrior: there’s an introduction by film critic Leonard Maltin, another good director’s commentary, and that’s it. You know, the same things that were on the Road Warrior standalone Blu-ray. Worst yet, Thunderdome doesn’t even have that. It’s as barebones as a disc can get. Now this is the first time Thunderdome has been on Blu-ray, but honestly, it is the worst looking movie of the three. I didn’t count lines of resolution or anything, I’m not that anal. I go by the old school measurement of how it looks, and compared to the first two movies, which look awesome, the colors here are muted and there is more grain on the screen. Does that mean the film looks bad? No, not really, but it obviously gets nowhere near the love of the previous Mad Max movies.

So should you pick this new trilogy box set up? Well if you already have Mad Max and The Road Warrior on Blu-ray then no, not unless you want a good (but not great) Blu-ray copy of Thunderdome or a spiffy new metal case. If you don’t have any or all of these movies on BD, especially the first two, then I would say hell yeah. Mad Max movies are the good stuff, folks, and they need to be in the collection of any and all movie fans.