Lovecraft’s Pillow and Other Strange Stories 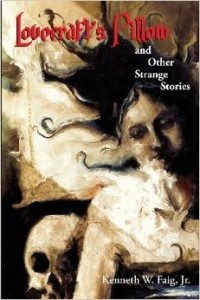 Lovecraft’s Pillow and Other Strange Stories

The siren call of fiction is strong among Lovecraft scholarship. Indeed, some of the most successful researchers have succumbed to the call, using their vast familiarity of Lovecraft and his circle to attempt to write in the style of the masters. The results range from tediously florid to nausea-inducing pastiche. Few have escaped this fate of understanding the construction and style of the prose yet being unable to translate that familiarity into a readable story, the end result of which is at best, unremarkable, and at worst, Derlethian revisionary dreck.

Then there is Kenneth W. Faig, erudite scholar of Lovecraft’s ancestry and his involvement in amateur journalism. Faig has been writing fiction set in the Lovecraft cosmos for 40 years. Most of his work appeared in journals and small press, restricting awareness of his work to a select few. This is a grave tragedy. Faig’s work is exactly what readers need to cleanse their literary palates. It is engaging text, with a light touch that belies the mastery of the prose.

The book can be divided into two sections. The second half is a series of short stories, ranging from Faig’s “Life and Death,” a successful attempt to emulate Lovecraft’s Dunsanian poems, to “Innsmouth 1984,” a look at how evil evolves instead of dying.

The first half of the book is Faig at his finest. The “Lovecraft Collectors” series appears together for the first time, with Faig as a Lovecraft scholar who stumbles across the journal of a David Parkes Boynton of Fall River, Massachusetts. While others have assumed Boynton was attempting fan fiction, Faig suspects that Boynton really knew Lovecraft’s family, which casts the Boynton vignettes in a different light. As Faig weaves these stories around gaps in Lovecraft’s timeline with references to actual events, it becomes increasingly easy to forget this is storytelling, not historical accounts. I sincerely hope that Faig will stumble across a missing section or two of Boynton’s journal in the foreseeable future.