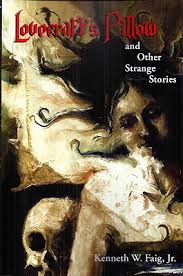 LOVECRAFT’S PILLOW AND OTHER STRANGE STORIES

The term “Lovecraftian” can mean many different things to many different writers.  To some, it means monstrous creatures and evil cults.  To others, it can mean an examination of cosmological indifference and insignificance.  More recently, some writers are taking a broader definition and including Lovecraft and his life in their interpretations.  Kenneth Faig, Jr. is one of those authors.

For many years, Faig has been a leading scholar in Lovecraftian criticism and specifically in research regarding Lovecraft’s family and ancestors.  What few know is that Faig is also a skilled writer of unnerving and disturbing weird fiction himself.

This book collects the majority of Faig’s fiction and it is no surprise that the bulk of it is “Lovecraftian” to greater or lesser degree.  However, Faig manages to infuse a tone into his tales that is sometimes whimsical while masking a horrifying undercurrent.

Most of these stories have only seen print in Faig’s contribution to the venerable Lovecraft APA (Amateur Press Association), the EOD.  For many, this is the first time they’ve had an opportunity to enjoy these tales and they are in for a treat.

Fully half of the stories belong to Faig’s series, “Tales of the Lovecraft Collectors”.  Most of these stories concern the character David Parkes Boynton as he meets those who have known Lovecraft as well as others who followed the Providence writer’s works or who knew secrets of his heritage.  Like many of Lovecraft’s own stories, these tales carry an uneasiness within them.  They speak of strange dealings in forbidden knowledge and unknown terrors lying behind routine research.  There is even the suspicion that Boynton, narrator of these events, does not escape unharmed.

The other stories in the collection are a marvelous blend of the weird and truly terrifying.  “Life and Death” recalls many of Lovecraft’s early ‘classical’ tales while “The Haunting of Huber’s” concerns an occult investigator’s case of a haunted restaurant that owes as much to Rod Serling as it does to Lovecraft.

Truly disturbing, however, is “Innsmouth 1984” which finds an unwary couple stumbling onto a modern version of Lovecraft’s decaying town only to find new horrors have taken the place of the old ones.  The title tale, “Lovecraft’s Pillow” is based upon an anecdote which Stephen King told during the 1979 World Fantasy Convention in Providence.  Although intended as a humorous quip, Faig takes the idea and concocts a story that is at times amusing but ends up leaving the reader unsettled and uneasy with the hints of what might have come through that innocuous bedding.

“Leng” is perhaps the most terrifying tale in the book because it is so understated.  There are echoes of T.E.D. Klein’s excellent “Events at Poroth Farm” as well as so many of Lovecraft’s stories of miscegenation.  It shows how truly frightening it can be when others so quietly proclaim their insanity.  There is no murderous cult here but the horror is no less effective.

Faig does not write often and that is a shame.  In these quiet tales, he displays a mastery of form, setting and tone that few who write profusely have attained.  One can but hope that there will be more tales to come of Lovecraft collectors and these strange, unsettling landscapes.