Lovecraft and a World in Transition – Book Review 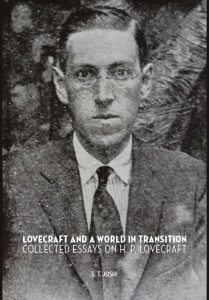 There is a current controversy as to whether the World Fantasy award, a Gahan Wilson designed caricature of H.P. Lovecraft, should be replaced due to Lovecraft’s racism. This is neither the venue nor the format to jump into that morass, but I bring it up due to the misinformation being used in the argument.

Now, if you want to understand Lovecraft well enough to jump into that debate, you have two choices. You can read all of Lovecraft’s writings, including his letters. His published letters currently span upwards of 20 volumes across five publishers. When you finished reading all those (and assuming more volumes haven’t been released), place them in historical context.

Your second choice is consult an expert. And there is no more accomplished scholar on the work and life of H. P. Lovecraft than S. T. Joshi. For over thirty-five years, Joshi has edited the letters, annotated the prose, and chronicled Lovecraft’s life. And this new book, Lovecraft and a World in Transition collects all of the critical essays that Joshi has written since 1979.

Rather than study just the prose in a vacuum, Joshi approaches Lovecraft holistically, noting the interplay between author and creation. Approaching the material biographically, philosophically and thematically, Joshi offers insight, reinterpretations and along the way, reinvigorates scholarship into a broader understanding the complexities of the man and the myth.

The final section of the book may be the most important; it covers Lovecraft’s legacy and influence on the next generation of writers, such as Robert Bloch and Fritz Leiber. This section includes to a significant essay on the evolution of the “Cthulhu Mythos” (and if it really should be considered a mythology), and ends the book with Joshi’s keynote address at the NecronomiCon convention of 2013 in Providence, RI.

In the introduction, Joshi expresses his doubts that he’ll be producing any additional essays of the scope and magnitude of those found in the 645 pages of this tome. I hope he is underestimating his future impact in Lovecraft studies, but even if he is correct, this collection represents the most important body of work on Lovecraft outside of Lovecraft’s letters, and unequivocally confirms the relevancy and importance of Lovecraft and his work in modern horror.