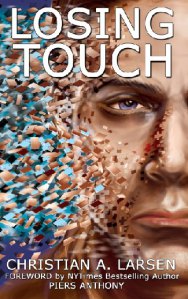 Who hasn’t fantasized, if only for a moment, about being a superhero? Being able to fly, to crush steel, to turn invisible, to pass through walls?

On the other hand, how many have wondered what it might be like to become a superhero, to realize suddenly that things are happening over which you have no control, which you don’t understand (and at first don’t particularly want), and which are leading you away from your essential humanity?

Ah, that’s a different story…one told by Christian A. Larsen in an insightful, intriguing, and ultimately entertaining and uplifting novel, Losing Touch.

The title is nicely ambiguous. Morgan Dunsmore is losing touch in the most fundamental senses. Gradually, beginning with some anomalous and frustratingly comic experiences with urination and bowel movements, Morgan incrementally loses touch with the material world around him. Undigested food, no longer part of his organic system, abruptly passes through his flesh; while he is trying to repair a washing machine, his hand passes through the metal without pain or injury. As the anomalies multiply, he simultaneously loses touch with those around him: his wife and his two sons.

Much of the first few chapters of the novel focus on the familiar and the familial. Morgan is out of work; his wife is recovering from back surgery.  They have pared their lives—and their expenditures—until they have essentially hit bottom. And then things start to happen that threaten to destroy their unity. Morgan must hide his new-found power from everyone, especially his wife. He has to figure out how to wear adult diapers to keep unwanted…things, shall we say…from dropping out of his body and at the same time keep his wife—whom he loves deeply—from noticing. Since he can pass through any material, including human flesh, sexual intercourse becomes impossible; and since he can no longer eat without the danger of excess fluids suddenly spurting from his stomach, he cannot be with his family at meals.

As the novel progresses, his problems increase. He loses touch with his own values and, to a degree, his identity when he has a one-night stand with a young woman…and almost kills her. He decides that his ability to phase through matter—which the novel explains as “quantum tunneling”—might relieve his financial pressures, leading to an abortive attempt to rob a bank from the inside out and a more devastating encounter with a couple of thugs employed by one of the biggest crime lords in the country.

Throughout, Morgan sinks lower and lower, figuratively and, finally, literally, as he phases through the earth itself, only to be rescued in the most unlikely—yet almost inevitable—manner. And in the end, Larsen demonstrates exactly how much Morgan must sacrifice, what it will take, for him to regain ‘touch’ with the things that are truly important.

Many of the scenes are comic, designedly so. Others, especially in the opening chapters, are explicit and occasionally gross. And still others are deeply tragic as the power he is developing leads him to lose sight of all that is dear.

Larsen has done an admirable job in reversing the Superhero motif, revealing the pitfalls and the potential dangers when a normal, average man find himself able to do unusual, extraordinary things but lacks any kind of instructional handbook or moral guidelines in making decisions. He handles the transitions from comic to tragic well, making Morgan’s systematic fall and final restoration a single, smooth, polished narrative.