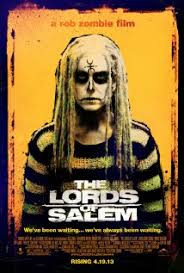 The Lords of Salem

The horror films of Rob Zombie are darkly humorous, creepy, hip, and fun. As a director, Zombie has made a career out of giving moviegoers excitingly twisted scare films filled with massive amounts of horror references, demented over the top humor, and all the blood and scares genre fans love. His movies are true rock and roll “spookshows”.

In his new film Rob Zombie is not out to scare us or give us a film filled with macabre fun. This time his plan is to disturb us on a deep level. With The Lords of Salem he succeeds in doing just that.

This is a profoundly grim horror film and one that is distinctly original in its execution. Zombie has stated that this is his first film in which he had complete control in the making and editing process and, although I feel The Devil’s Rejects is his masterpiece, it proves to be an extremely satisfying, bizarre, and original experience.

The story is as follows, Heidi, played by Sheri Moon Zombie in her best performance and meatiest role to date, is one third of a “shock jock” trio for a Salem Massachusetts radio station. They have a late night show and are patterned after many of the morning radio D.J.’s that overflow our morning radios, except their show and humor have a darker edge, as their guests are Satanic Death Metal rockers and authors who write books on witches and Devil cults. The other two D.J.’s are played by the great Ken Foree and Jeff Daniel Phillips, who gives a good performance as a sweet man who cares deeply for Heidi.

One night Heidi is sent an unsolicited record from a group calling themselves “The Lords”. The trio plays it on more than one occasion and is unaware that Heidi is becoming affected by it in very dark and sinister ways. The atonal music is a black magic chant sent to cast a spell over the women of Salem. Heidi is a recovering drug addict and her colleagues fear that she is slowly relapsing when, in fact, there is something darker happening to her.

Heidi lives in one of the spookiest apartment buildings I have ever seen. Her landlady, played by the great Judy Geeson, seems to keep a watch over her tenant in a motherly sort of way. One afternoon she introduces Heidi to her weird “sisters” played by genre queens Dee Wallace and Patricia Quinn. It is a good moment and it gives Wallace a chance to show her mildly comedic side and Quinn to have a juicy role, her best since playing Magenta in The Rocky Horror Picture Show.  Quinn shows a knack for understated acting and hers is one of the best performances in the film.

As Heidi comes more and more under the spell of the black magic, her life and mind begin to unravel. It is here where director Zombie really gets to use his love of bizarre Satanic imagery, and he does so with absolutely zero restraint.

As a horror fan for decades, I have seen just about everything there is to see. Some films can still scare me and occasionally turn my stomach, but after probably a thousand or more horror movies over the years, I have become a bit jaded and the films must work harder to shock me. The Lords of Salem fills the screen with some of the most devilishly macabre images I have ever been witness to. After the film, I could not shake those images from my mind. They will be with me for a long time as they are extremely disturbing yet fascinating. This is not a negative, as the film’s images are very effective.

The director has stated that the two biggest influences in his design for the film were Stanley Kubrick’s The Shining and Ken Russell’s outrageous cult classic The Devils. If you know either of the two films you will see Zombie’s love for them painted across the screen with ultimate respect.

The film’s imagery is a loving ode to Russell’s The Devils, as we see truly terrifying satanic rituals and symbolism. I will not reveal the things we are shown but there are moments when your eyes and mouth are open wide. You cannot turn away from the screen. You are at once disturbed, frightened, and intrigued.

In Heidi’s building there are long, dimly lit hallways, and Zombie uses slow, steady, “Kubrikian” tracking shots as the room down the hall, room number five, holds something evil.  We are witness to moments where Heidi is staring down the empty hallway and, eventually, being drawn inside the room. Keeping with his love of all things Kubrick and the fact that A Clockwork Orange is Zombie’s favorite film, Heidi’s apartment is lit and designed like many scenes in Clockwork. Also, her walls are plastered with images from Georges Melie’s A Trip to the Moon. Weaving a devilish tapestry out of the films he loves, the set design is one that, in a perfect world, would receive an Oscar nomination. The work by Director of Photography Brandon Trost is truly excellent.

Rob Zombie is a master of gathering casts populated with the some of the best and most underused character actors in film, and with The Lords of Salem, he continues his streak. The extremely underrated Bruce Davidson has one of his more interesting roles in decades playing a writer who stumbles on to the “song” by “The Lords” and begins to investigate, as he is sure that it is connected to something Satanic. He has a great scene with Geeson, Wallace, and Quinn that is one the film’s best and one which I will not speak of.

Other actors in the cast do great work as well. Maria Conchita Alonso plays Daividson’s wife. She has a good time with her cynical role in her few scenes and has great chemistry with Davidson.

The late character actor Richard Lynch had a role, in flashback, as the Reverend who condemns a coven of witches to be burned alive. Lynch was very ill during production and began to lose his eyesight and ability to remember lines so he was replaced by actor Andrew Prine. Sadly, Lynch died before production finished. Prine was great but it would have been amazing to see Lynch sink his teeth into the role.

Horror film legends Sid Haig and Michael Berryman show up in one shot as they tie a witch to the stake to be burned. The two actors had bigger roles but were left on the cutting room floor, as Zombie stated he felt the film to be too long for a mainstream release and had to make extensive cuts. Clint Howard, Udo Keir, and the original I Spit on Your Grave’s Cameille Keaton suffered similar fates as their roles also disappeared due to cuts. I hope to see them on the deleted scenes or perhaps a “director’s cut” when the film hits video.

One performance I must speak of is Meg Foster, a good character actress who has been around since the early seventies and has been in a few genre classics, most notably  the underrated serial killer film Relentless and John Carpenter’s classic They Live. She is a beautiful actress and mostly known for her piercing almost unreal blue eyes. In this film, her eyes are colored with contacts and it wasn’t until the credits that I realized it was Foster. Her performance in this film could be her best yet. Foster sinks her teeth into her role and gives a large, bold, unhinged performance. I will not say who she plays or how her character fits into the film’s plot. I will let you find her on your own, if you can!

Sherri Moon Zombie has taken a lot of criticism regarding her work in her husband’s films. Most fans like her but many say that she is an over the top and abrasive actress. To be fair, the characters she has played thus far have been written in an outlandish manner and, under Zombie’s direction we assume, her wild performances were warranted. However, in this film, Sherri Moon gives an understated and nuanced performance. Her role deserves comparisons with Mia Farrow in Rosemary’s Baby and Catherine Denuve in Repulsion, both horror films made by Roman Polanski. She is very, very, good here and shows us that she is more than a sexy, wacky, prop in her husband’s movies. Seeing her fine work in this film, her critics should be silenced.

The film’s score is perfect and enhances the already black mood set by the director. Zombie’s guitarist John 5 scored the film with newcomer Griffin Boyce. It is a potent score that goes well in unison with the evil imagery and properly mellows during the quieter moments. The two collaborator’s work on the film is creepily melodic and one of the better horror scores in a while.

Is there style over substance here? To be fair, yes. My one complaint is the script. It is a good screenplay but there are times when it feels a bit fragmented and unfinished. I would have liked to have seen more with the beginnings of the spell being cast over Heidi and the town’s women. The scenes that exist are creepy but we needed more. The reason for what is happening is fine but could have used a bit more backstory as well. The final shot will confuse you, as it did me and everyone who has seen it, and could have been better represented. I feel the director spent more time putting the imagery together and less time fleshing out the story. I am not taking away from the originality of the film nor the fact that I enjoyed the screenplay. There just needed to be a bit more “meat” in the screenplay. Sometimes the narrative gets close to being paper thin.

Rob Zombie fans were divided over his remake of John Carpenter’s Halloween. This film will prove to be his most divisive yet. There is no middle ground in what one will take away from this film. You will be awed by its imagery and atmosphere or you will ask yourself, as one moviegoer in the row behind me screamed at the film’s conclusion, “What the fuck did we just see?”

Be warned, this is not the Rob Zombie film you are expecting. This film is pure 1970’s horror. The films of that era were dark, cynical, and almost never ended well for the protagonists. Save for a few moments of smiling at Dee Wallace’s kooky performance, there is a conscious lack of humor and the film will shock today’s squeamish audiences and leave some scratching their heads. The film is deadly serious.

The Lords of Salem represents Zombie’s continued growth as a filmmaker in both his ideas and visuals. In my opinion, he has now reached the level of cult stylists such as the late Ken Russell and Nicolas Roeg. Those director’s films are either loved or hated by film enthusiasts but all would agree that there is true artistry and originality in their work.

Rob Zombie has created an art-house horror film; a satanic fever dream unlike anything he has done. It is a film that will stay with you whether you want it to or not. Despite its minor flaws, it is mostly brilliant, dark, disturbing, and full of doom. The Lords of Salem is one of Zombie’s finest films and, in many ways, one of the best horror films of the past decade.