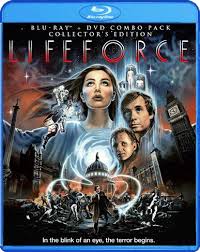 Tobe Hooper justly earned the title of “horror master” if for no other reason than for giving the world the nightmare that was The Texas Chainsaw Massacre, one of the most original, shocking, and daring films of all time. He followed that up with a few OK to good fright flicks, I always dug The Funhouse and the original Salem’s Lot miniseries, but he only really got a taste of “Big Hollywood” when the directed Poltergeist. Assuming of course he did direct that movie and it wasn’t really Stephen Spielberg as many think (myself included). Whether or not he did hold the reins of that film, its huge success allowed Tobe to not only pick his next project, but get a pretty decent budget for it.

Unfortunately for him, he chose a very weird, genre-bending story from an author largely unknown to the general public and when it came out the film was widely panned by both critics and audiences alike. It bombed at the box office and even the author of the novel it was based on called it, “the worst film ever made.”

Hmm, shows what he, and the majority of Regan-era movie watchers, knew. Simply put, that film, called Lifeforce, is a far bit removed from being the worst film ever made, but I may be getting ahead of myself.

The movie is about a joint British-American spaceflight in the space shuttle Churchill flying out to meet up with and study Halley’s Comet during one of its infrequent trips into our neck of the woods. So it is by chance that they find a 150 mile long alien spacecraft hidden in the comet’s tail. That surprise is further built upon when a group of astronauts go over to the alien vessel and finds it filled with large, and thankfully dead, bat-like creatures. Not only that, but they soon discover three perfect, beautiful, naked humans sleeping in glass coffin-ish containers. The sleepers consist of a woman and two men and after a few surprises I won’t give away here, the trio find their way to earth to be dissected by the typical scientist types.

Naturally, things don’t go that smoothly, less we wouldn’t have a movie to watch.

Once here, the beautiful queen alien, played by Mathilda May, bedazzles everyone, men and woman alike, with her sexiness before literally giving them the kiss of death and sucking the life force out of them. Victims of this life-suck become withered, mummy-like corpses, only to get back up after a few and go looking for someone else to suck the life out of. So on and on it goes until all of London is overrun by life force hungry, vaguely zombie-ish, withered vampires. As for the real vamps, the ones from space, well let’s just say that they’re not only alive and kicking, but got big plans for the entire planet.

Oh and if that wasn’t enough to get you geeked to see this flick, keep an eye out for Patrick Stewart who gets to indulge in some hot man on man smooching action. I swear, has that man always looked the same? Talk about a vampire. Either that or he has his very own Portrait of Dorian Gray somewhere. Also the screenplay was co-written by Dan O’Bannon who wrote Alien, wrote and directed the groovy Return of the Living Dead, and directed the Lovecraftian flick, The Resurrected. If you’re a fan of any of those three films, and you really should be, then you need to give this movie a look.

On to the special features on this new Blu-ray/DVD combo pack from the always awesome Scream Factory. First and foremost, the HD transfer looks really, really good. Everything is sharp, clear, colorful, and no I’m not just talking about the scenes with Ms. May in them. There are two versions of this movie for you to choose form. There’s the original theatrical cut, and the extended director’s cut. There are also two commentary tracks, one with director Tobe Hooper and the other with special make-up designer, Nick Maley. There is an interview with Mathilda May aptly called “Dangerous Beauty” that runs 15 minutes. There is a short 10 minute interview with director Tobe Hooper all about space vampires, which was the film’s original title, and the trials and tribulations of making the movie. There is a seven minute interview with star Steve Railsback. There is an old (they call it “vintage” here) making of featurette that runs 21 minutes and just reeks of 80s awesomeness as it was filmed on set and it looks like an old VHS transfer, but I really got a kick out of it. Trailers, TV spots, and a still gallery bring this dandy list of goodies to a close.

Lifeforce is a Grade-A example of 80s sci-fi horror and a fun ride from start to finish. It’s got cool special effects that run from simply passable to pretty darn good. Decent splatter, lots of nudity, new takes on old monsters, cosmic horror, a heaping helping of originality, end of the world goodness, and more than competent direction and acting from all involved are all good reasons to check out this film if you’ve never done so. It is very highly recommended. Lifeforce comes out on June 18th.