Legends and Lore of the North Shore – Book Review 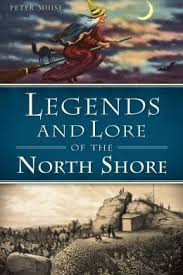 There is something different about the North Shore of Massachusetts, something indefinably, but recognizably wrong that has fused itself to the essence of the land. It would be easy to dismiss this as some sort of lingering miasma from the Salem Witch Trials of 1692, but as Peter Muise’s new book carefully points out, Native American traditions of spirits and supernatural shenanigans predate that witch hysteria. Not convinced that Cape Ann and the North Shore have more weirdness per square inch than any self-respecting region should? Let us examine Muise’s book.

Salem Witches obviously are a feature, but Muise begins 50 years before that with the first witchcraft trials, then discusses Salem and the use of “spectral evidence,” and wraps up with the last witchcraft trial held in Salem, an 1878 case that, had it played through, could have derailed the Christian Science religious movement.

Being an area that made its fortune in the clipper ship China trade, it should be no surprise that the area is filled with tales of pirates and lost buried treasure. Muise has carefully selected some particularly odd tales, ranging from a lady pirate to a pickled pirate.

Although the entire book is a romp, Muise obviously had the most fun compiling the middle chapters; one is on weird locations associated with later legends of pirate caves, devil visitations, and that nice gentleman who had inspirational messages carved on rocks in the middle of nowhere; and another chapter is on local eccentrics, including the minister who tried to add the spark of life to a machine.

Muise wraps up the book with a lovely selection of cryptozoological tidbits: mermaids, werewolves, sea serpents and specters. Throw in a little H.P. Lovecraft, and dash of Cotton Mather, and you have an amazing debut book.  Being somewhat familiar with the area, I sincerely hope this is the first in a series on the North Shore. Trust me, there’s more where this came from. Mr. Muise—get writing!