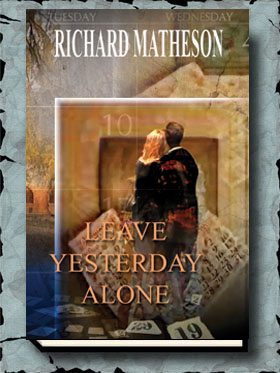 First we have Musings, a memoir that legendary story teller Richard Matheson wrote on and off over the span of about twenty years.  It’s as close as it gets to the legendary author’s inner perspective and rare insight on his upbringing, his work and the world around him.  While several entries will likely be better received by Matheson completists, his entries regarding various film adaptations of his work should pique the interest of even the casual reader.  One of several anecdotes we learn about Richard Matheson is while the man was firm on many values and beliefs – spiritual, political or otherwise – he also held a certain vulnerability about him.  Sadly, this gentler, meeker side led him to getting stuck holding the dirty end of the stick on a few occasions such as the case of letting the film rights to I Am Legend go to MGM..  While it’s unfortunate there aren’t more entries, I feel that only lends to the value of this collection.

Which brings us to the novel, Leave Yesterday Alone, written around 1949 either just before or just after he wrote Hunger And Thirst.  This early effort chronicles the fictional world of college life with the backdrop being the author’s own recalled experiences.  Our main character, Erick Linstrom, is a deep thinking aspiring writer who seems to have a penchant for looking towards the bleaker side of life.  Erick often stumbles over the thin line of love and misery throughout the entirety of his college years.  Is it fear of losing his freedom that this young man to push away whenever love comes knocking, or is it something a bit more underlying, something darker, than that?  The story is autobiographical in that it blends Matheson’s own personal experiences into the plot much the same way his war experiences were blended into his novel, the Beardless Warriors.

Through the transcendent power of the author’s pen, we fall vicariously in love alongside Erick and through Erick’s eyes we bear witness to a world that’s wrought with innocence and cynicism, beauty and danger.   With Matheson’s minimalistic style well rooted even at this early stage of his writing career, it’s what remains unwritten that carries the most lingering impact.

Packaged beneath another outstanding cover by cover artist, Harry O’ Morris, Leave Yesterday Alone is a stark examination of the human condition which focuses on the relationship between man and woman as well as man and his most inner self.  Sure, this may be Matheson at his earliest, but it’s also Matheson at his best, both celebrating and foreshadowing many years of greatness to follow.