Laughing in the Dark – Book Review 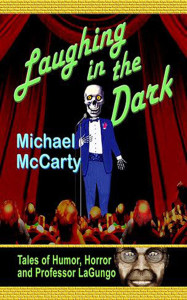 Many of us have read horror anthologies from authors who are already established or those who are new to the genre. So for me at least it is very rare to read a series of short horror stories written by a former stand-up comedian.

The front cover does a lot to introduce Michael McCarty and his stories of humour, horror and the very voodoo inspired Professor LaGungo. As the picture, is a comedian doing his usual stand-up routine in front of an audience, he doesn’t look like an ordinary comedian – he is a skeleton smiling in front of an uneasy audience.

Damnation Books publish many anthologies including Mark McCarty’s A Hell of a Job and Partners in Slime which he co-wrote with Mark McLaughlin. In Laughing in the Dark, Michael McCarty co-writes some of the stories with various comic collaborators; his wife Cindy, Jody R. LaGreca, Sandy De Luca and Mark McLaughlin. As Laughing in the Dark is the first anthology by Damnation Books that I have read, I have no other comparison book to base this one on, but the stories are bite-sized and are about themes that run through the horror genre, vampires, zombies, possessed pets, killer kittens, gator guys and even seven foot dancing cockroaches.

In Stephen King and The Pit Bull from Hell this story has a wannabe writer trying to emulate Stephen King’s life, thinking he can be as successful as him if he does. This is one example of how McCarty can take an idea and turn it into a funny story; the protagonist goes through hell trying to live up to King’s pedigree as a writer with disastrous consequences. McCarty takes standard horror ideas and adds his own flair to the characters and situations he puts them in. when a character interviews some of the best names in horror history, writers, devil worshippers, even Satan himself, it’s intended to end with a shocking, but humorous ending.