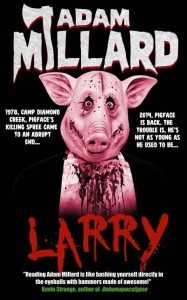 Larry “Pigface” Travers is a serial killer whose best days are far behind him. After gleefully killing teenage camp counselors in the late 1970s, he is finally outwitted by the “final girl” on his last night of terror and carnage. Presumed dead, “Pigface” fades into campfire legend as the years pass.

“Pigface” spends his time working jigsaw puzzles and hanging with his elderly mother in a decrepit cabin in the woods. And although he knows his time is getting short, the urge to kill teens consumes his days and nights, and his faithful pig mask eggs him on.

He puts on the mask and takes up his axe, heading towards Camp Diamond Creek once again. But is he up for the gruesome task, some 40 years later?

Larry is a clever take on the camp maniac slasher genre. What would happen if a serial killer tried again as an old man?

To be honest, I was a bit put off at the beginning of this story. The humor and dialogue fell flat for me, like the author was trying too hard to be funny. But as I read on, the story itself drew me in, and I was able to appreciate the absurdity of it all.

The characters are all one-dimensional and stereotypical, of course, which is what makes the story work so well. And for those of us who grew up watching those slasher flicks in the theater way back when, we can appreciate the “Pigface’s” lamentations of his aches and pains as he tries to do his best at a very grueling and thankless job.

If you’ve ever wondered what happens to elderly slashers, Larry is a perfect look at the “what ifs” of such a question. Highly recommended!