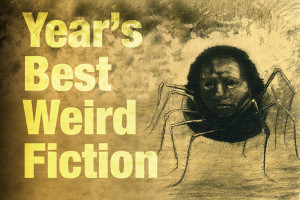 Toronto, Canada, July 2013 — Laird Barron, a master of the weird tale, will edit the inaugural volume of the Year’s Best Weird Fiction for Undertow Publications. Barron’s work has been nominated for several awards, and has been reprinted in numerous “Year’s Best” anthologies.

“It’s a tremendous honor to edit the inaugural Year’s Best Weird Fiction. I am pleased to be working with Michael Kelly and his Undertow Publications, an eminent force in the horror and weird fiction genres,” Barron said.

Established in 2009 by writer Michael Kelly, Undertow Publications (UP) is home to the acclaimed weird journal Shadows & Tall Trees, from which a number of stories have been selected for various “Best Of” anthologies. The initial release from UP, Apparitions, was a finalist for The Shirley Jackson Award. As editor, Kelly has been a finalist for the Shirley Jackson and British Fantasy Society Awards, and his fiction has appeared in a number of venues, including The Mammoth Book of Best New Horror.

“I’m thrilled that Laird Barron has agreed to edit the first Year’s Best Weird Fiction,” Kelly said. “I could think of no better person for the initial edition.”

Undertow Publications is undertaking a crowd-funding campaign to raise funds for the book. Kelly says, “There has never been a dedicated volume of the year’s finest weird fiction. It seems evident that an independent press will have to take up the task. We are hopeful the many aficionados of weird fiction will help fund what we believe will become an important and vital annual anthology. We envision very little, if any, overlap with the other “Year’s Best” volumes. And I’m excited to see what Laird conjures.”